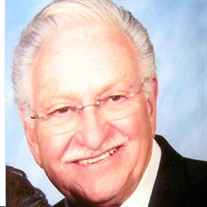 Stephen N. Sanchez (Steve) 77, of The Villages, Florida (Village of Chatham), passed away on September 12, 2016. Memorial Mass will be held at St. Mark the Evangelist Church on Monday, September 19, 2016 at 10:00 with Fr. Sabastian Hanks, celebrant. Burial/Interment will take place at Santa Fe National Cemetery at a later date. Steve was born on September 27, 1938 in Albuquerque, New Mexico to Juan Sanchez and Rebecca P. Sanchez. He served his country with pride in the Navy aboard the USS Essex CVA-9. He worked as a Code Enforcement Officer for the Albuquerque Police Department until retirement in 2002. Upon moving to The Villages with his wife Patricia, he became involved in many activities such as bowling, ushering/greeting at St. Mark's parish, various veteran's organizations, and of course, golf. He enjoyed spending time with his wife, joking with his many friends, spending time improving his golf swing/putting skills and most importantly, taking care of other people. Stephen volunteered around the village of Chatham doing whatever needed to be done. He loved working with tools, tinkering on motors, woodworking, and painting. Making use of his green thumb, he kept his yard looking like a park. Steve is preceded in death by his parents and his younger brother, Juan Diego, who gave his life in the service of his country in Vietnam, younger sister, Jenny and older sister MaryLee. Stephen is survived by his wife of 57 years, Patricia. His daughters Tamara Sanchez, Julia Spinelli CDR (Ret. Navy) of Santa Fe, New Mexico. His daughter Kristine and her husband Brigadier General Gerald Goodfellow, of Ft. Belvoir, Virginia. He was also survived by his pride and joy-his grandsons Stephen Goodfellow, of Chicago, Illinois and 2LT Gregory Goodfellow, of San Antonio, Texas. In lieu of flowers, the family requests a donations to be made to: Air Warrior Courage Foundation http://airwarriorcourage.com or St. Jude Children's Hospital https://www.stjude.org/ Condolences to the family may be sent to PageTheusFuneralHome.com local arrangements by Page Theus Funeral Home, Leesburg, FL

Stephen N. Sanchez (Steve) 77, of The Villages, Florida (Village of Chatham), passed away on September 12, 2016. Memorial Mass will be held at St. Mark the Evangelist Church on Monday, September 19, 2016 at 10:00 with Fr. Sabastian Hanks, celebrant. Burial/Interment... View Obituary & Service Information

The family of Stephen N. Sanchez created this Life Tributes page to make it easy to share your memories.

Send flowers to the Sanchez family.