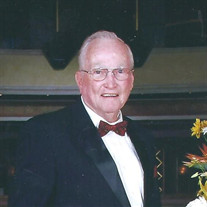 Stanley H. Upchurch, Jr., 88, Leesburg, Florida passed away on October 12, 2014 in Eustis, Florida. Mr. Upchurch was born on March 13, 1926 in Richmond, Virginia to his parents Stanley H. Upchurch and Ena (Dunlap) Upchurch. Mr. Upchurch was the Owner of Stanley H. Upchurch Insurance Agency of Houston, Texas. Mr. Upchurch and his wife moved to Leesburg 17 years ago from Houston, Texas, and he was a member of Morrison United Methodist Church in Leesburg, FL. He was a veteran of World War II serving in the U.S. Army in the European Theater. He was a Life Member of the V.F.W. and was the former President of the Houston Square and Round Dance Council and was a very proud Dale Carnegie Instructor. He was most proud of his two daughters’ advanced academic and professional accomplishments. He is survived by his loving wife of 25 years, Nancy Upchurch of Leesburg, FL; two daughters: Claudia (James) Richter, M.D. of Winchester, MA, Susan (Stephen) Neill, Ph.D. of Dripping Springs, TX; children by marriage: Sherri Dawn King of Plantersville, TX and Bruce Edward Greenberg of Richmond, TX; four grandchildren: James Andrew Richter, Laura Emily Richter, Sean Charles Greenberg and Blake Allen King; one great-granddaughter: Grace Eva Richter. He was preceded in death by his wife of 35 years, Eva Mae, daughter-in-law Marni Robbins Greenberg and a grandson Brandon King. A Celebration of Life Memorial Service will be held on Thursday, October 16, 2014 at 11:00 A.M. at Page-Theus Funeral Home Chapel, Leesburg, Florida with Inurnment to follow at a later date at Houston National Cemetery, Houston, Texas. Services have been entrusted to Page-Theus Funeral Home, Leesburg, FL. On line condolences and memories may be shared by visiting www.pagetheusfuneralhome.com.

The family of Stanley H. Upchurch, Jr. created this Life Tributes page to make it easy to share your memories.

Send flowers to the Upchurch, family.