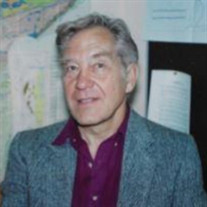 Samuel I Root passed away February 24, 2020 after a long and productive life. The environment, origin of mountain ranges, and especially the Earth’s natural resources including oil and gas, coal, and metals are areas in which Dr. Samuel Root, the Ross K. Shoolroy Professor of Natural Resources (Emeritus) at the College of Wooster, actively worked for many years. Sam was born in Winnipeg, Manitoba Canada on March 1, 1930 to Rose and Sheppy Root, immigrants from Eastern Europe who sought freedom in Canada. Dr. Root received his undergraduate degree, B.Sc Honors, and then his Masters degree in 1955 from the University of Manitoba. He then went on to earn his PhD in geology in 1958 from The Ohio State University where he was a University Fellow. Sam spent a dozen years in industry working world-wide as an exploration geologist, at times under primitive conditions in the Andes and Amazon regions. He spent 12 years in government research on the geology and mineral resources of the Appalachians. He retired from industry and left Rio De Janeiro in 1983 to join The College of Wooster geology faculty as the first Shoolroy Professor of Natural Resources. There he taught courses related to the environment and resources and continued research with students and colleagues nationally. He was also a consultant to the Energy Division of the World Bank in his early years at the college and travelled extensively on their behalf to South America and Africa. He retired from the college in 1997 and became an emeritus professor. He was appointed to a number of government commissions and boards in Ohio and Pennsylvania and is a member and fellow of several scientific societies. In retirement he continued to consult, complete research and speak about issues related to his fields of expertise. In 1952 he married Esther Soltzman, his college sweetheart, and together they happily roamed the world living in eight different countries as Sam worked internationally for a major oil company. They spent many years in South America, where their two sons were born in Bogota, Colombia. Their daughter is a true Buckeye, born while the Roots were at The Ohio State University. Sam is survived by his wife Esther who made a loving and stimulating home everywhere they lived, at times under difficult conditions that included revolutions and earthquakes. His children were a source of joy: Sharon (Root) Spiegel (Walter), Malcolm (Lori) Root, and Joel (Donna) Root. Grandchildren Alan (Regan) Root, Rachel (Root) Dryer (Matt), Jeremy Spiegel, Shira Spiegel, Jacob Spiegel, Aaron Root, and Benjamin Root and great grandchildren Mason, Landon, Rennyn, and Lylah Root, and Briella and Liam Dryer all brought much happiness. A Celebration of Life will occur at Temple Shalom of Central Florida on Sunday, March 8, 2020 at 10:30am. Donations in Memory of Samuel Root can be sent to: the National Park Foundation (donate.nationalparks.org), or AIPAC (American Israel Public Affairs Committee) (aipac.org).

Samuel I Root passed away February 24, 2020 after a long and productive life. The environment, origin of mountain ranges, and especially the Earth&#8217;s natural resources including oil and gas, coal, and metals are areas in which Dr. Samuel... View Obituary & Service Information

The family of Samuel I. Root Ph.D created this Life Tributes page to make it easy to share your memories.