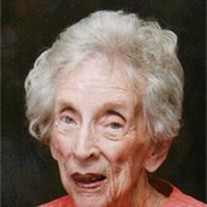 Ruth Clarinda Espey passed away on Friday, July 27, 2012 at the age of 94. She was born on October 3, 1917 in Pittsburg, PA to the late David and Maud Brown. Ruth came from a large family and took great pride in family. She learned to drive at the age of 8, and her first car was a 1929 Buick. Ruth married Harold Espey in Texas in 1943, but had to post-pone their honeymoon due to his wartime duties. After WWII ended they made their home in PA where they bought a farm and raised chickens and children. She was a born optimist, a good cook and a faithful wife, who spent most of her life as a homemaker and a bookkeeper. Ruth has made her home in the Lake County area since 1987, and has been an active member of the Silver Lake Community Church since 2006. She has also served on the Lake Square Presbyterian Church pastoral search committee, the Scottish Highlands Association, the New Life Presbyterian Church, the Fairview Presbyterian Church, the Old Stone Church also known as the James Chapel Methodist Church where she played the organ and did fund raising to install electricity in the church.. Ruth is survived by two sons; Thomas (Loretta) Espey, and James (Lynn) Espey, one daughter; Lucille (Jerold) Espey-Francis, grandsons; Mike, Scott, Patrick (Kelly), Peter (Caitlin), and Nick Espey, granddaughters; Ruth (Tom) Singer, and Sarah Espey. She was preceded in death by her husband Harold Espey, and one son Lowell Espey. Ruth is further survived by grandson Jerold Francis Jr, grand-daughters; Nannetto To, Dawn VanAlstine, Leslie Bailey and Debra Francis, and 8 great-grandchildren, one of whom was just born. Funeral Services for Mrs. Espey will be held on Friday, August 3, 2012 in the Silver Lake Community Church at 10:00 a.m. with Rev. Jack Hood and Cathy Gates officiating. Friends may call at the church on Friday from 9:30 until the time of services. Burial will follow in Florida National Cemetery. In lieu of flowers memorials in Ruth’s honor may be made to the Silver Lake Community Church. Page-Theus Funeral HomeAnd Cremation Services

Ruth Clarinda Espey passed away on Friday, July 27, 2012 at the age of 94. She was born on October 3, 1917 in Pittsburg, PA to the late David and Maud Brown. Ruth came from a large family and took great pride in family. She learned to drive... View Obituary & Service Information

The family of Ruth Clarinda Espey created this Life Tributes page to make it easy to share your memories.

Send flowers to the Espey family.