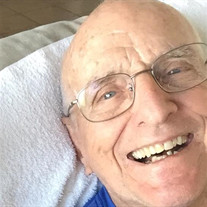 Mr. Ronald Charles McCracken age 86 of Leesburg, Florida passed away peacefully Sunday, November 20, 2016 in the presence of his loving family, at the Lane Purcell Hospice House, Sumterville, FL. He retired in 1995 as the 23 year owner of Management Today in St. Petersburg, FL. His successful company preformed consulting for Physicians and Dental practices. He received his high school diploma from Decatur High, Decatur, GA in 1948, and was a graduate of Georgia State College of Business formerly known as the (Atlanta Division of the University of Georgia.) Mr. McCracken was a decorated US Army veteran of the Korean War. Serving in the Department of the Army Security Agency. He served twenty years as the Executive Director of the Florida Society of Anesthesiologists before his retirement in 1995. After retirement he volunteered at the Boyd Hill Nature Trail, Pinellas County, FL., and later at Hernando County Public Library, and Hernando County Meals on Wheels while living along the beautiful Withlacoochee River. Moved to Lake County Florida in 2002, where he volunteered at Cornerstone Hospice. Mr. McCracken was born in Rittman, Ohio to the late Hugh E. and Ruth S. Steele McCracken and proceeded in death by a sister Mary Lou Ruggeri. Ronald is survived by his wife of 63 years, Carolyn Wright McCracken. Son Michael A. McCracken of Nokomis, FL., Daughter Dianne D. Campbell, and husband Glenn, of Howey in the Hills, FL., three granddaughters, Kellie Hess (Todd), Courtney Campbell and Kara Lynn Campbell, and one great grandson Jax S. Hess. There will be celebration of life to be announced at a later date. In lieu of flowers the family requests donations be sent to Cornerstone Hospice, in care of Ronald C. McCracken, 2445 Lane Park Road, Tavares, FL. 32778 On line condolences may be viewed at www.pagetheusfuneralhome.com Page-Theus Funeral Home 914 West Main Street, Leesburg in charge of arrangements.

Mr. Ronald Charles McCracken age 86 of Leesburg, Florida passed away peacefully Sunday, November 20, 2016 in the presence of his loving family, at the Lane Purcell Hospice House, Sumterville, FL. He retired in 1995 as the 23 year owner of... View Obituary & Service Information

The family of Ronald Charles McCracken created this Life Tributes page to make it easy to share your memories.

Send flowers to the McCracken family.