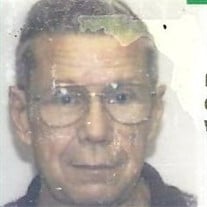 Robert Lee Montney, 77, Wildwood, Florida, passed away on July 24, 2014 at Leesburg Regional Medical Center surrounded by his loving family. Mr. Montney was born on September 8, 1936 in Flint, Michigan to his parents True Montney and Mary (Miner) Montney. He was a retired Supervisor for the Coke Cola Company and had also worked as a Builder and Real Estate Developer, Pilot, Scuba Diver, “A Man of Many Talents and Good at all of them”. A veteran of the Korean War serving in the U.S. Navy, where he was decorated for developing land coordinates that saved many lives during amphibious landings (Still used today). Mr. Montney was a lifetime member of the V.F.W. both in Michigan and in Florida where he served as Post Commander. He is survived by his loving children: Mark Montney, Raymond Montney and Gloria Sadler all of Jennings, FL; two sisters: Pat Crews of Davison, MI and Beverly Groce of Tawaus, MI; six grandchildren: Kenneth, Jamie, Charlie, Billy, Eccho and Brandi; eight great-grandchildren: Britney, Nathan, Cory, Brook, Wyatt, Audrey, Seth and Dustin. He was preceded in death by his son Jeff Montney. Online condolences may be left by visiting www.pagetheusfuneralhome.com. Services entrusted to Page-Theus Funeral Home Chapel, Leesburg, FL.

The family of Robert Lee Montney created this Life Tributes page to make it easy to share your memories.

Send flowers to the Montney family.