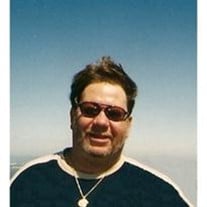 Robert Alan (Bobby) Lauderbaugh, 54, went home to be with the Lord on October 12, 2009.Robert was born in Miami, FL on October 8, 1955. After moving to Pinellas Park, FL He went on to play Little League Baseball and was on the 1968 A & W Root Beer Team that went on a 28 straight game winning streak that won them the District Title. Also while in Pinellas Park he received a Certificate of merit for the Boys Clubs of America. Bobby continued his love of sports by playing in Pop Warner Football. He went to High School at Zephyrhills High where he kept on playing Varsity Football and Baseball. He graduated in 1973. In 1974 he joined the United States Army where he served his Country, and was honorably discharged in 1976 as a Radio Operator. Bobby moved to Orange City, FL where he worked for The Orange City Telephone Company for 8 years. He then transferred to Stromberg Carlson and was sent to Korea to install new telephone communication systems. Later in life Bobby worked for Lowe's and Chrysler Jeep Eagle in Sanford, FL. Bobby also continued his love of sports by playing Softball on several winning Teams along with his two brothers and their father as the Coach.Bobby was a lifetime Member of the DAV (Chapter 30) and NOTR Dugout (512) of Sanford, FL. Bobby was a strong man with a great sense of humor, always having a one-liner to crack a joke and had a way of just making people smile. He also had a big heart that showed throughout his life from taking care of his beloved Eleanor to just giving the shirt right off his back to anyone that needed it.Robert is survived by his mother, Geri Lauderbaugh Cortis and step-father, Paul Cortis both of Leesburg, FL; son, Alan Lauder; grandson, Caleb Lauder both of Ocala, FL; two stepsons: Gregory of CA and John of CT; brothers: Danny Lauderbaugh of Longwood, FL and Scott Lauderbaugh of Sanford, FL; sisters: Debbie Smith of Leesburg, FL and Janice Nims of Pensacola, FL; two nieces: Misti and Savanna; three nephews: Chris, Brian and Eric; three great nephews: Jacob, Austin and Brian, Jr; and two great nieces: Courtney and Kierstin.Graveside Memorial Services will be held @ 11:00 a.m. Friday, October 23, at Florida National Cemetery in Bushnell, FL. Family and Friends are requested to meet at the Florida National Cemetery by 10:45 a.m.

Robert Alan (Bobby) Lauderbaugh, 54, went home to be with the Lord on October 12, 2009.Robert was born in Miami, FL on October 8, 1955. After moving to Pinellas Park, FL He went on to play Little League Baseball and was on the 1968 A & W Root... View Obituary & Service Information

The family of Robert Alan Lauderbaugh created this Life Tributes page to make it easy to share your memories.

Robert Alan (Bobby) Lauderbaugh, 54, went home to be with the...

Send flowers to the Lauderbaugh family.