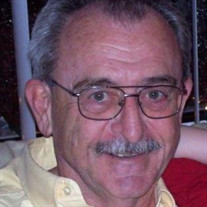 Richard Michael Gibbons, 81, of Leesburg, FL, passed away peacefully on September 8th, 2020. Richard was born on December 27, 1938 in Staten Island, NY, to the late Margaret (Quinlan) and Richard Michael Gibbons Sr. Richard graduated from St. Peter’s High School, attended Staten Island Community College and the College of Insurance. For many years, he was an active member of the Knights of Columbus Assumption Council. He enjoyed running, bowling, golfing, was very social and could always be found with a smile on his face. When he relocated to Florida, he filled his days socializing with his neighbors at the pool and taking ballroom dancing lessons with his wife. Family was very important to him. He was the “fun” grandpa and loved spending time with his 12 grandchildren and 2 great-grandchildren. Richie had a penchant for sweets, Oreos (or ice cream or candy) were not safe under his watch! Richard is survived by his wife Rita, daughters Rita, Diane & Kathy, step-children Anthony, Diane & Robert and his 12 grandchildren and 2 great-grandchildren. Richard was an amazing husband, son, father, grandfather, great-grandfather, and friend. He will be truly missed by everyone that knew him. A Memorial Service will be held on Saturday September 19, 2020, from 8:30 AM to 10:30 AM, at the Page-Theus Funeral Home in Leesburg, FL, followed by a Funeral Mass at St. Paul’s Catholic Church, Leesburg, FL, at 11:00 AM. A private comital ceremony will be held at a later time. In lieu of flowers the family is asking you to consider a donation to Cornerstone Hospice in his memory.

The family of Richard Michael Gibbons Jr created this Life Tributes page to make it easy to share your memories.

Customized sympathy cards. Mailed for you.