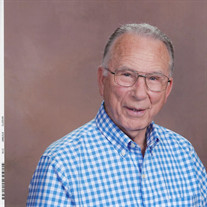 Paul Patrick Tucker, age 79, of Fruitland Park, Florida, passed away Thursday, July 19, 2018. Paul was born on September 19, 1938, in Tennessee to his parents, Charles B. and Alice (Pollock) Tucker. As a young adult, Paul moved to Orlando, Florida, where he met his beloved wife, Lillie “Kay.” The couple settled in the central Florida area, where they were blessed with three children, David, Debbie, and Mary Alice. Raising his family in the church was important to Paul, and he and Kay were active members at Calvary Baptist Church in Leesburg, FL, and at Grace Bible Baptist Church in Fruitland Park, FL. In his younger adult years, he taught boys’ Sunday School and drove the church bus. Paul was retired from a fifty-plus-year career in the home building supply business. He was in management with Scotty’s Home Builder’s Supply for thirty-three years, most of that time being in Leesburg, FL. He was later employed with Hugh’s Supply and, most recently, Pat’s Sales, in Leesburg. Self-taught in many aspects of building, he built his own home in Fruitland Park, where he and Kay and their children and grandchildren enjoyed many happy times. Paul enjoyed taking Kay to their property in the North Carolina mountains to relax and enjoy the dogwood blooms in spring and the changing leaves of fall. He also enjoyed gardening, yardwork, and helping others. Paul is preceded in death by his beloved wife, Kay, and his only son, David. He is survived by his sisters, Sally Winsett, Lilia Beane, and Louise Guthrie; his brother, Robert Tucker; his brother-in-law, Carl Honaker, and sister-in-law, Becky Dixon; his daughter, Debbie and her husband, Robert Hall; his daughter, Mary Alice Tucker; his daughter-in-law, Renee Tucker; his grandchildren, Paul Tucker, Kevin Tucker, Robert Tucker, Alicia Brown, Chad Hall, Sam Puritz, and Ethan Puritz; and his great grandchildren, Allison and Savannah Tucker, Kayden and McKinlee Tucker, and Presley, Gavin, Keith, and Henry Brown. Visitation will be held Friday, July 27, 2018, from 6:00-8:00 p.m. at Page-Theus Funeral Home in Leesburg. Services will be held on Saturday, July 28, 2018, at Grace Bible Baptist Church in Fruitland Park at 10:00 a.m. The burial will follow the service at Shiloh Cemetery in Fruitland Park. Online condolences may be shared by visiting www.pagetheusfuneral.com. In lieu of flowers, the family requests donations be made to the Alzheimer’s Foundation of America at www.alzfdn.org.

Paul Patrick Tucker, age 79, of Fruitland Park, Florida, passed away Thursday, July 19, 2018. Paul was born on September 19, 1938, in Tennessee to his parents, Charles B. and Alice (Pollock) Tucker. As a young adult, Paul moved to Orlando,... View Obituary & Service Information

The family of Paul Tucker created this Life Tributes page to make it easy to share your memories.

Send flowers to the Tucker family.