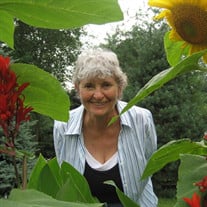 Mona was born July 25, 1940 in Floyd, New York, to Lynn and Olive (Gerow) Charles. She graduated with a Diploma in Nursing from the St. Luke’s School of Nursing, in Utica, New York, which qualified her to obtain her Registered Nursing license. She married Ronald P. Smith on September 23, 1961, in Westernville, New York. In 1977 she graduated with a Bachelor of Arts from the University of Northern Iowa, Cedar Falls, Iowa. During her working career, she worked as a staff nurse in several hospitals, and coordinated the startup of the initial cardiac unit at Sartori Hospital in Cedar Falls, Iowa. Also, she worked as a Nursing Instructor at the Allen School of Nursing in Waterloo, Iowa. Later, she supervised the Cardiac Rehabilitation Unit at the University of Northern Iowa, Cedar Falls, Iowa. After Ron retired in 1993, they began to winter in Frostproof, Florida. Mona enjoyed her many friends in Cedar Falls, Iowa, as well as Frostproof and Leesburg, Florida. Most recently she enjoyed many activities at Highland Lakes Development – the swimming pool, bingo, feast-and-fun, and happy hour. Mona loved nursing, and attending to those in need. She checked weekly blood pressures of many. She also believed in the saying: "Love people and cook them tasty food." Her granddaughter claimed, “Grandma doesn’t make any bad food.” Impressively, her talent was mostly self-taught, of which she passed her culinary gifts on to her children and grandchildren. Mona is survived by her husband, Ronald, son Peter (Leslie) Smith of Ann Arbor, MI, daughters, Kimberly (Gerald) Porter of Menomonie, WI and Heather (Ashley Yelds) Smith of Shanghai, China. She is further survived by two granddaughters, Hannah Smith and Madeline Smith. She was preceded in death by her parents, sisters Leona Hammond, Betty Rogers, Patricia Jones, and Sharon Charles. A private family celebration of life is planned for a later date. Memorial contributions may be made to Cornerstone Hospice and Palliative Care or to the donor’s choice. www.cshospice.org Condolences may be shared on the tribute wall.

Mona was born July 25, 1940 in Floyd, New York, to Lynn and Olive (Gerow) Charles. She graduated with a Diploma in Nursing from the St. Luke&#8217;s School of Nursing, in Utica, New York, which qualified her to obtain her Registered Nursing... View Obituary & Service Information

The family of Mona C. Smith created this Life Tributes page to make it easy to share your memories.