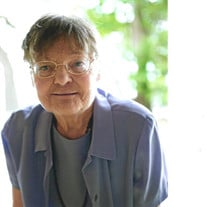 Mary Deborah Tindle, 69, of Leesburg, Florida, died Friday evening, July 1, 2016, at Leesburg Regional Medical Center, after a valiant battle against lung disease. She possessed a positive, can-do spirit, a wonderful sense of humor, and a sharp mind--constantly looking and moving forward--taking things as they come. It was her ability to see the positives in all of life’s toughest challenges that carried her through each and every day. She loved her family and friends, and she was loved by so many people in return. Born March 18, 1947, to Harry Sweeting Tindle and Margaret Eugenie Tindle in Hertfordshire, England, she grew up in Letchworth, England. When she was just 3 years old, her father Harry died of pneumonia. Mary was raised by her mum, and was educated at The Royal Warehousemen Clerks and Drapers School--a boarding school. She later attended St. Christopher School and St. Francis College in Letchworth. After schooling, Mary lived for a time in London, working for Chelsea College (now known as King's College), and the advertising agency of Foote, Belding, and Cone. She moved to Canada in the late 1960’s, and spent time in Canada working for Far Hills Inn—a resort in Eastern Quebec. She moved back to England, where she got married. In the early 1970’s, she moved to upstate New York in the United States, to settle and begin a family. She became a U.S. citizen in 1977. After beginning a family, she spent much of her working career in hospitality management for a number of well known hotel and restaurant chains in the Southeastern United States. She took great pride in her work, to ensure the highest levels of guest satisfaction, and possessed an uncanny ability to make people feel welcome. She had a special knack and ease for entertaining people from all walks of life. She retired in 2011 after a 25 year career. During her life, Mary had a passion for many things. At a young age, she took up piano, learned how to sew, and began solving The Daily Telegraph crossword puzzles. She loved to spend time at her home in Leesburg reading English literature and mystery novels, caring for her cats, and even trying her green thumb and fingers at gardening. One of her life-long loves was listening to Mick Jagger and the Rolling Stones. She attended one of the band’s first live performances at the Marquee Club on Oxford Street in London in the early 1960’s, and some 40 years later, watched them perform at a concert in Florida. Mary is survived by her son, Jason and his wife Tonia Ashline, of Chanhassen,Minnesota, daughters Emily Ashline and her husband Drew Fosdick, of Leesburg, Florida, and Sally Baker of Bexleyhealth, England. She had 6 grandchildren (Natalie, Esme, Rachel, Joseph, Charlotte, and Thomas); 6 great grandchildren (Louie, Alexis, Lottie, Evalynn, Harvey, and Melody); one sister, Penelope Abrahams, of Nantwich, England, and one brother, Gregory Tindle, of Cardiff, Wales; 5 nieces and nephews (Rupert, Oliver, Sophie, William, and Jenny), and many other family members and friends. She is preceded in death by her father and mother, Harry and Margaret. A celebration to honor her life will be held at a later date. Donations in memory and honor of Mary can be made to the American Lung Association at www.lung.org. May God bless you Mary. We love you and we miss you.

The family of Mary Deborah Tindle created this Life Tributes page to make it easy to share your memories.

Send flowers to the Tindle family.