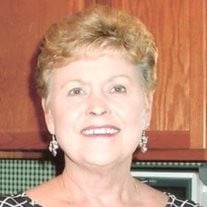 Margaret “Kay” Semesco Brandon, age 72, passed away on Friday, April 4, 2014 in Tavares, Florida. Kay was born on April 1, 1942 in Bartley, West Virginia and she moved to the Daytona Beach, Florida area in 1962 from Belle, West Virginia. Kay’s first career was that of “Wife and Mother” and if this roll offered awards, fortune and fame she would be known around the world as one of the BEST! As her children grew into adults, and after her first husband’s (Jim Semesco, Sr.) death she started a new chapter of her life which led to her work as a Teller for Sun Trust Bank and as a Retail Associate with many loyal longtime customers at Maison Blanche, and Burdines/Macy’s department stores in the Volusia Mall in Daytona Beach. She took her role as “Mother” very seriously and was a fierce advocate on behalf of her children Janie and Jimmy Semesco. She was also a mother figure to many other children from her neighborhood, and area school’s where she often volunteered. She truly possessed a servant’s heart and was selfless when it came to her family, and she did whatever was required to ensure her children had piano, guitar, saxophone, tap dancing lessons, bmx bicycles, surfboards and the best education possible. She was known by her friends and family for her cooking abilities and was often confronted at “Pot Lucks” to reveal which dish(s) were hers so they would not be missed; and she had friends near and far watching their calendars for her Thanksgiving through Christmas time pumpkin breads. Most of all she was a fantastic Grandmother to her grandchildren. She absolutely adored her grandbabies, and cheerfully shrugged off any and all accusations of spoiling them (Which she did every chance she got.) In 2001 she married her best friend Harvey Brandon. Harvey was devoted to Kay and ended her loneliness that she felt from losing her husband. Harvey treated her like a queen and she took every opportunity to let people know how lucky she was to have found someone so special to spend the rest of her life with. They enjoyed traveling and taking regular walks on the beach and in the mall, and fit together like two peas in a pod. She will also be remembered for being a strong Christian and a 43 year member of Daytona Christian Church where she spent many summers coordinating Vacation Bible School programs, attending prayer circles, and Sunday school. She is survived by her loving and devoted husband of 12 years Harvey; her daughter - Janie (Vinnie) Tedeschi of Apopka; son – Jim (Bev) Semesco of Leesburg; sister – Helen (Sam) Sawyer-Winn - Orlando; brother – Nim (Vicky) Maloney – Orlando; Grandchildren Michael (Mindy) Tedeschi of Danville, VA; Allycia (Brendon) Tedeschi of Huntington, WV; Hunter and Carter Semesco of Leesburg, FL; and special friends Deanna, Bev, Linda, Jeanette, Betty and Maria as well as many aunts, uncles, nieces and nephews who she adored. A service celebrating her life will be held 1:00 PM Wednesday, April 9, 2014 at Daytona Christian Church with her nephew Rev. Brad Steele serving as Officiant. The family will receive friends from 6:00-8:00 PM Tuesday at the Shannon Maloney Funeral home 4084 Halifax Drive, Port Orange, FL 32127.

The family of Margaret "Kay" Semesco-Brandon created this Life Tributes page to make it easy to share your memories.

Send flowers to the Semesco-Brandon family.