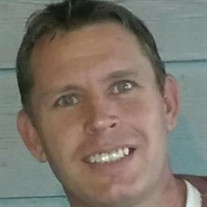 The gates of heaven opened and all of God's angels welcomed my son, Larry, into his eternal place of rest on March 23, 2021, the very day of his mother's birthday. He is now with his beloved grandfather, George Calvin Murberger. Larry was guided by both to be kind, mannerly, gentle, loving, respectful and compassionate to everyone he met. As a child he loved playing pool and skateboarding. His mother taught him how to water ski at the age of 3. At the age of 13, he developed a passion for creating abstract art. As the years passed, he became quite an accomplished abstract artist to say the very least. Spring breaks at Daytona Beach were a yearly ritual. He would ride the ocean waves on a tethered raft as far out as he could go and pretended to be a miniature superman. The smiles, laughter and joy he showed me were priceless in his mother's heart. I shall forever cherish that sight. But now, instead of riding the rough waves, he is now calm, safe and at peace among the angels. Unbeknownst to most, Larry was an advocate for the abused and homeless in Leesburg. He gave his heart and soul to the poor mothers and innocent children. He would get clothing and stuffed animals for the children and most of all, make time to listen to their life stories. If needed he would build some form of a shelter so it could be called their home. His goal was to make sure they were loved and kept safe. He would tell me the success stories with tears in his eyes. Yes. He lived to do for others knowing all along that he was unable to do for himself as a result of a multitude of obstacles along his journey. Larry's life was a challenge to himself and others. He was a problem solver, creative and loved a challenge. He walked the walk for the tired and weary. His love was genuine. He was misunderstood by way too many people. Only a few really knew my real son. So as his mother, I only have one request as you read this. Please honor the memory of my son by attending his funeral so you get to know the real Larry.... Also known as Lutz. The death of a child is unfathomable but to be remembered as a true child of God will help ease the pain and suffering along with a shattered heart that belongs to his beloved mother Mary Baron.

The gates of heaven opened and all of God's angels welcomed my son, Larry, into his eternal place of rest on March 23, 2021, the very day of his mother's birthday. He is now with his beloved grandfather, George Calvin Murberger. Larry was guided... View Obituary & Service Information

The family of Larry E. Loutzenhiser II - LUTZ created this Life Tributes page to make it easy to share your memories.

The gates of heaven opened and all of God&#39;s angels welcomed my...

Send flowers to the Loutzenhiser family.