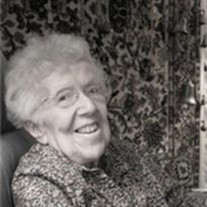 Kathryn Beryl Sutton (Kernan) I was born on March 14, 1914 at 103 Livingston Street in Madison, Wisconsin to my parents James (Barney) B. Kernan and Florence Kernan (Smith). Barney and Florence had already had one son Phillip, who was born in... View Obituary & Service Information

The family of Kathryn Beryl Sutton created this Life Tributes page to make it easy to share your memories.

Send flowers to the Sutton family.