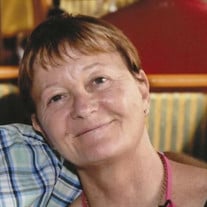 Karen Ann Honold, 63, The Villages, Florida went to be with the Lord on January 24, 2021 at her residence in The Villages, Florida. Karen was born on July 13, 1957 in Philadelphia, Pennsylvania. She was raised by her loving parents Ludwig and Betty Honold. She attended Garnet Valley High School class of 1975 in Concord Township, Pennsylvania. After High School became a Merchant Marine and worked from 1977 to 1982 as both a cook and engineman for both Atlantic Richfield (ARCO) and Exxon. Karen settled briefly in Green Mountain Falls, Colorado in 1985 where she worked in Real Estate and for a local weekly newspaper. She returned to Pennsylvania and briefly drove tractor trailers for National Service Lines. Karen settled down to the family business by becoming manager of Glencroft Club Apartments in Folcroft, Pennsylvania and raised Ostriches at Mendenhall Farm in Concordville for 20 years. She retired to Green Creek, New Jersey, where she built a home and bred and trained Great Danes. Karen then decided to move south to warmer weather and settled in Greenville, South Carolina for nine years and finally to The Villages in 2017. Her passions were Great Danes, Parrots, playing in the dirt, corvettes, cards and target shooting. She was involved from 1987 to 2001 with Great Dane Rescue as a foster Mom and Mid Atlantic Great Dane Rescue League. She was also involved from 2008 to 2017 with Phoenix Landing Parrot Rescue. Karen was a huge supporter of Mill Creek Retirement Home for Horses, Inc. since 2013. At her death she was a 21+ years active member of Alcoholics Anonymous. Karen was a devout Christian and belonged to Oxford Assembly of God Church in Oxford, Florida. She was an avid baker and was widely known for her cookies of all types. She is survived by her loving husband David Normand of The Villages, FL; God-Son: Jared Scott of Saluda, NC. She was preceded in death by her parents and her two brothers: Mark Cronrath and James Vincent. A Celebration of Karen’s Life will be held on Friday, February 5, 2021 at 11:00AM at Oxford Assembly of God Church, Oxford, Florida with Pastor Derrel Strickland Officiating. In lieu of flowers a donation may be made in Karen’s name to the Mill Creek Retirement Home for Horses, Inc. at P.O. Box 2100 Alachua, FL 32616-2100 or Phoenix Landing Parrot Rescue at P.O. Box 459, Alexander, NC 28701 or the Animal Rescue Foundation of your choice. Online condolences may be shared by visiting www.pagetheus.com. Arrangements are entrusted to Page-Theus Funeral Home and Cremation Services, Leesburg.

Karen Ann Honold, 63, The Villages, Florida went to be with the Lord on January 24, 2021 at her residence in The Villages, Florida. Karen was born on July 13, 1957 in Philadelphia, Pennsylvania. She was raised by her loving parents Ludwig and... View Obituary & Service Information

The family of Karen Ann Honold created this Life Tributes page to make it easy to share your memories.

Karen Ann Honold, 63, The Villages, Florida went to be with the...

Send flowers to the Honold family.