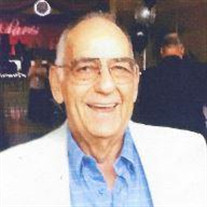 Joseph Philip Flad, Jr went to heaven October 21, 2019 in Leesburg, FL. He was born in Norristown, PA, February 20, 1936, to Anna Mae and Joseph Philip Flad, Sr. He was predeceased by his first wife of 54 years Mary Elizabeth Abernathy and his first son, Joseph P. III. He is survived by his wife Gloria, Leesburg, a son, Thomas J. of St. Petersburg, a daughter, Laura Richards of Weaverville, NC. and his four grandchildren. He moved to St. Petersburg when he was five with his father, mother, and sister, Joanna Gable. He attended St. Petersburg schools, Woodlawn and Norwood Elementary, Lealman Jr. High, and graduated from St. Petersburg High School. He was very proud of serving honorably in the Marine Corp. He was packed and sitting on his bunk waiting for the plane to take him to Lebanon when at the last minute the orders were cancelled. Then all his service was states side. He owned several print shops for 40 years among them Diamond Printing and Jomar Printing, all in St. Petersburg. After selling the business he moved to Leesburg in 2010 to escape the St. Petersburg traffic. In Leesburg, he married the former Gloria Fernald Ellinwood who he had known since 5th grade at Norwood Elementary. They attended the same schools and after graduation went their separate ways until meeting again at their high school quarterly luncheon who neither had ever attended prior. They always said it was God’s intervention and meant to be. They were very happily married for almost seven years always holding hands. Joe was a very courteous man always opening doors, helping with chairs, and never wearing a hat indoors. Joe’s great smile and friendliness will be greatly missed. Condolences, memories and photos may be shared on the tribute wall.

Joseph Philip Flad, Jr went to heaven October 21, 2019 in Leesburg, FL. He was born in Norristown, PA, February 20, 1936, to Anna Mae and Joseph Philip Flad, Sr. He was predeceased by his first wife of 54 years Mary Elizabeth Abernathy and... View Obituary & Service Information

The family of Joseph P. Flad, Jr. created this Life Tributes page to make it easy to share your memories.