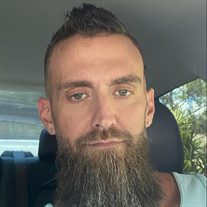 Jonathan Robert Angilusso, of Fruitland Park, FL, passed away Friday November 20th, at home surrounded by his loving family, following a long battle with Colon Cancer. Born July 6th, 1982, Jonathan proudly served his country in the United States Marine Corp after graduation from Leesburg High School. A true Warrior, Jonathan fought long and hard against his diagnosis, keeping his family and friends close to him and living life to its fullest every single day. Always trying to make everyone around him laugh and smile, his ‘never give up’ spirit and ability to make even difficult situations seem easier, he was a true inspiration to those that loved him and fought this battle with him by his side. Jonathan once said, “Cancer is what I have, not who I am,” and he lived by that till the very end. He was proceeded in death by his Grandmother Patricia Arnold (Orr) and Grandfather Robert (Bob) Arnold. He is survived by his Mother Sandra Dennie (Orr) and father Bobby Dennie, his biggest cheerleader and supporter his sister Ashley Dennie (Getty), big brother and hero, Aaron Brady (Loretta) sister Sabrina Angilusso (Marquez) who if she could would have fought the battle for him, and the Angel in disguise that made every day a day of great love and fortune just by who she was, who made him happy and joyous in his final months Angie Less. He also is survived by his 3 children, whom he was immensely proud of and loved dearly, ‘Little” Jonathan (16), Olivia (12), and Baylen (10), as well as many nieces and nephews Marissa, Logan, Devin, Hayden, Payton, Dellahney, Hunter, Enzo. Jonathan’s infectious smile and laugh, and his go with the flow attitude made him a friend to everyone he met and a stranger to none. His incredible work ethic and dedication to family leaves a legacy for those he leaves behind. A larger than life personality, he will be greatly missed by all those that had the privilege and honor to know him and love him. His actions were always kind, a generous hand and an active mind. Anxious to please and loath to offend. A loving son, brother, father, and friend. We will all miss him immensely. His wicked sense of humor was only surpassed by the size of his heart. During breakfast recently, Jonathan heard the gentleman sitting next to him was having a rough morning. Jonathan called the waitress over and paid for the gentleman’s meal, only to find out that the gentleman was not only a Veteran but also a retired police officer. They spoke for quite a while like they were old friends. In a crowd, he would stand out because of his love to make people laugh. On a recent vacation he helped a street performer out at the Key West sunset festival. Stealing the heart of not only the performer but the other spectators, Jonathan became “that guy” and people for the rest of the trip would high-five or fist bump him and go “you were that guy!” as they would pass him on the street. The thing he should be remembered for the most though was his devotion to family. Even when he was not feeling well, he organized and brought to fruition a trip for his mother and siblings to make memories and spend time together as well as a trip for his daughter for the same purpose. Jonathan’s’ celebration of life, and viewing will be Wednesday December 9, 2020 at 12PM for family, 1PM to friends and the public. Service will begin at 2PM located at Page-Theus Funeral home located at 914 West Main Street Leesburg, FL 34748. Immediately following his final resting place, located at Hillcrest Memorial Gardens located at 1901 County Road 25-A, Leesburg, Fl 34748. Arrangements are entrusted to Page-Theus Funeral Home and Cremation Services, Leesburg, FL

The family of Jonathan R. Angilusso created this Life Tributes page to make it easy to share your memories.

Send flowers to the Angilusso family.