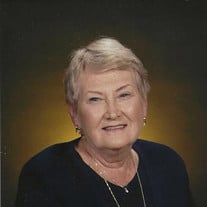 Joan A. DeFontes, age 78 of The Villages, passed away on Tuesday, December 28, 2016. She was born to Alvera and Felix McCarroll on January 26, 1938 in Brooklyn, New York. Joan was a stay-at-home Mother until her three children were grown. She later spent 20 years as an accounting secretary for Cablevision in Long Island, New York. Joan and her husband, Angelo, retired to The Villages in 2001. Since that time, she has been a member of St. Mark’s Evangelist Catholic Church. Joan was a prayer warrior for everyone in need whether they were close to her or a distant acquaintance. Family and friends were Joan’s passion and delight. She never missed sending a hand-created Hallmark card for special occasions. Joan was an amazing wife, mother, daughter, sister, grandmother and friend. She was married to Angelo, the love of her life, on October 1, 1960. They spent 56 wonderful years celebrating love, life and all of God’s wonders together. Joan will forever live in the hearts of everyone’s life she touched with her grace and love. Joan enjoyed collecting porcelain dolls, hand painting ceramic pottery and solving every crossword puzzle she tackled. She loved her home, community and Church. Joan is survived by her loving and devoted husband, Angelo DeFontes. She also leaves behind two sons and daughter-in-laws, Michael DeFontes and wife Glenda of Missouri, Brian DeFontes and wife Christine of Oklahoma; one daughter and son-in-law, Debra Castelli and husband Frank of Long Island, New York; one sister and brother-in-law, Evelyn and Mariano Petralia; five grandchildren, Brianna Teegarden, Mason and Madison Castelli, Nicholas and Jack DeFontes; and three great grandchildren, Jase, Sadie, and Mya Teegarden. A Mass of Resurrection will be held Friday, December 30, 2016, at 10:00 AM at St. Mark’s Evangelist Catholic Church in Summerfield, FL. Page-Theus Funeral Home and Cremation Services in Leesburg is handling arrangements. In lieu of flowers, donations in Joan’s name may be made to St. Jude Research Hospital at www.stjude.org.

Joan A. DeFontes, age 78 of The Villages, passed away on Tuesday, December 28, 2016. She was born to Alvera and Felix McCarroll on January 26, 1938 in Brooklyn, New York. Joan was a stay-at-home Mother until her three children were grown.... View Obituary & Service Information

The family of Joan A. DeFontes created this Life Tributes page to make it easy to share your memories.

Joan A. DeFontes, age 78 of The Villages, passed away on Tuesday,...

Send flowers to the DeFontes family.