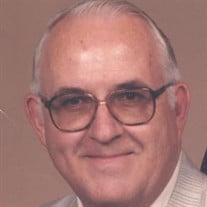 James A. Penwell, age 82, of Leesburg, FL went to be with the Lord on February 8, 2015. He was born on January 4, 1933 in Decatur, IL to his parents Harry and Delema Penwell. James enlisted in the United States Marine Corps, while attending Greenville College. He served a tour of duty in Japan during the Korean conflict and attained the rank of Corporal. He later earned certification as an emergency medical technician (EMT) and became a certified piano tuner. James became a self - taught steel-guitar player and later became a central Illinois country music personality. He had a substantial following of fans to experience his talent on the steel-guitar. His performances in country opry’s span more than thirty years. He even had the pleasure of playing behind numerous Nashville stars. He was a lifelong member of Decatur Free Methodist Church in Decatur, IL. He and his wife Juanita moved to Florida in October of 1989 from Decatur, IL. He is predeceased by his brother: Marvin Penwell. He is survived by his loving wife of 62 years: Juanita Penwell of Leesburg, FL; Son: Scott W. Penwell, of Decatur, IL; Daughter Joni (Jonathan) Wetmore, of Woodbury, MN; Brothers: David (Faith) Penwell, of Decatur, IL and Robert Penwell, of Decatur, IL; Sister in-law: Gloria (Penwell) Erickson, of Suttons Bay, MI; and Grandson: Austin Wetmore, of Woodbury, MN. James A. Penwell was a proud and loving Husband, Father, Brother, Grandfather, and Friend who will be deeply missed by many. In lieu of flowers donations may be made to First Baptist Food Pantry of Leesburg, FL. Donations may be sent to: 220 N. 13th St., Leesburg, FL 34748. Services have been entrusted to Page-Theus Funeral Home, Leesburg, FL. On line condolences and memories may be shared by visiting www.pagetheusfuneralhome.com.

James A. Penwell, age 82, of Leesburg, FL went to be with the Lord on February 8, 2015. He was born on January 4, 1933 in Decatur, IL to his parents Harry and Delema Penwell. James enlisted in the United States Marine Corps, while attending... View Obituary & Service Information

The family of James A. Penwell created this Life Tributes page to make it easy to share your memories.

Send flowers to the Penwell family.