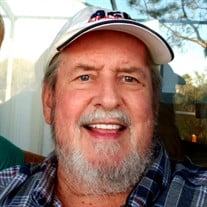 James Francis Parry, 80, Oneonta, NY, passed away on December 12, 2020, at U. F. Health Leesburg, Leesburg, Florida. James was born on October 2, 1940, to his parents George B. Parry and Vilma (Amberg) Parry. He was an alumni of Xavier High School, New York City, NY, and St. Peter's College, Jersey City, NJ. Jim and his wife June raised their family of four children in northern New Jersey where Jim was an enthusiastic gardener - for many years, growing most of the family's vegetables and raising chickens. He was a self-taught carpenter who could build anything from a chicken coop to a 3-bay garage. He was a securities trader for over 21 years before pulling up stakes and heading north to the hills of Otsego County with their youngest son to the property he and his wife bought early in their marriage. At first, he spent a couple of years getting to know the dirt roads and byways of the region while working as a delivery driver for local florists and transportation for cancer patients to Bassett Hospital. For the next 30 years he and his wife June built up their rental properties, housing families visiting the region for baseball tournaments and the Baseball Hall of Fame.About 10 years ago they joined the snowbirds and have now called Wildwood their winter home for the past few years. He was an avid reader of science, archeology, boating and fishing magazines. Jim was the kind of man who loved his family first and foremost. He is survived by his loving wife of 56 years: June Parry of Oneonta, NY; a son: James P. Parry of Buffalo, NY; two daughters: Jacqueline Parry of Laurens, NY and Judith Parry and her wife Jennifer Savino of Tampa, FL; a brother: John L. Parry of Port Jefferson, NY; a sister: Susan M. Madden of Rochester, NY. He was preceded in death by his parents, a son, John K. Parry, a daughter-in-law, Christine Fluhr, a grandson, Jacob R. Parry and a granddaughter-in-law, Mayra A. Parry. A Funeral Mass of Resurection will be held on Wednesday, April 7, 2021 at 11:00AM at St. Vincent de Paul Catholic Church, Wildwood, Florida. In lieu of flowers the family asks that you consider a donation to St. Jude Children’s Research Hospital at stjude.org/memorial in his loving memory. Online condolences may be shared by visiting http://www.pagetheusfuneralhome.com. Arrangements are entrusted to Page-Theus Funeral Home and Cremation Services, Leesburg, FL.

James Francis Parry, 80, Oneonta, NY, passed away on December 12, 2020, at U. F. Health Leesburg, Leesburg, Florida. James was born on October 2, 1940, to his parents George B. Parry and Vilma (Amberg) Parry. He was an alumni of Xavier High... View Obituary & Service Information

The family of James Francis Parry created this Life Tributes page to make it easy to share your memories.

Send flowers to the Parry family.