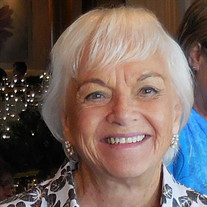 Helene G. Foreman, 87, Leesburg, Florida passed away in Ushuaia, Argentina while traveling with her daughter Kimberly. Mrs. Foreman was born on November 27, 1927 in Dudley, Massachusetts to her parents Bruno and Martha Redlitz. Mrs. Foreman had worked as a Flight Attendant for both Pan American Airways and K.L.M. Airlines based in New York. While working for K.L.M. Airlines she met her husband, Donald Foreman. They lived and traveled throughout the world while he worked in Major League Baseball, most recently, the San Francisco Giants. She moved to Leesburg, Florida in 2002 with her loving husband of 64 years, from Oakland, California. She had been very active with The Red Hat Society where she served as Queen for the Village of Longmeadow and served on the Queen’s Council at the Plantation. She worked diligently to create successful events such as the parade, luncheons and fashion shows. She had traveled 68 times on extended cruises with husband and family. Mrs. Foreman enjoyed playing bingo, Mah-Jongg, Mexican Train, swimming, and was accomplished in ceramics. She served tirelessly with the Girl Scouts from the 1950’s thru 1970, serving as a Troop Leader and on Los Angeles Council. She is survived by her loving children: Kimberly Ellen Foreman of The Villages, FL and Dr. Douglas Scott Foreman (Rosalyn) of Warwick, RI; a brother: Dr. Milton Redlitz; four grandchildren: Kevin Robert Bartholomew, Jeffrey Donald Bartholomew, Douglas Scott Foreman, Jr. and Jill Ashley Foreman; two great-grandchildren: Seth Hunter Bartholomew and Owen Scott Foreman. In lieu of flowers the family has requested Donations be made to Caring Canine Therapy Dogs at 2991 Westgate Drive, Eustis, FL 32726. A Celebration of Life Memorial Service will be held at The Plantation in Leesburg, FL(The Manor) on Friday, April 17, 2015 from 10:30AM to 12:30PM. Services have been entrusted to Page-Theus Funeral Home, Leesburg, FL. On line condolences and memories may be shared by visiting www.pagetheusfuneralhome.com.

The family of Helene G. Foreman created this Life Tributes page to make it easy to share your memories.

Send flowers to the Foreman family.