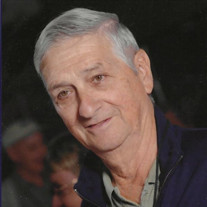 George L. Mollo, 86, Leesburg, Florida passed away on September 7, 2017 at Leesburg Regional Medical Center, Leesburg, FL. Mr. Mollo was born on December 21, 1930 in East Hempstead, New York to his parents Joseph Mollo and Katherine (Peles) Mollo. He was a former Shipping and Receiving Manager for Sears. He and his loving wife Theresa moved from Delaware, New Jersey to St. Augustine, FL and resided there for 7 years and moved to Leesburg, Florida for the past 17 years. He was a proud veteran of the Korean War serving in the U.S. Air Force. He was of the Catholic faith and had attended St. Paul Catholic Church in Leesburg. He was a former member of both the Knights of Columbus in Uniondale, Long Island, N.Y. and the Elk’s Lodge in St. Augustine, FL. He is survived by his loving wife: Theresa Mollo of Leesburg, FL; three sons: George Mollo of St. Petersburg, FL, Andrew Mollo of Uniondale, NY and Richard Mollo of St. Petersburg, FL; two daughters: Suzanne Golden and her husband Rob Rowen of South Carolina and Tracy Frein and her husband Richard of Rhode Island; a brother: Cosmo Mollo of New York; a sister: Marion Nimmo of Florida; two grandchildren: Lindsey Frein and Jack Frein and many loving nieces and nephews. A Mass of Resurrection will be held on Monday, September 25, 2017 at 8:30AM at St. Paul Catholic Church, Leesburg, FL. with interment to follow at Hillcrest Memorial Gardens Cemetery, Leesburg, FL. Online condolences may be shared by visiting www.pagetheusfuneral.com. Arrangements are entrusted to Page-Theus Funeral Home and Cremation Services, Leesburg.

The family of George L. Mollo created this Life Tributes page to make it easy to share your memories.

Send flowers to the Mollo family.