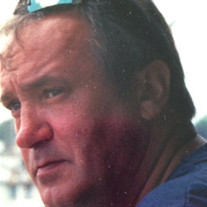 Frederick C. Hirsh, 62, Wildwood, Florida passed away on September 29, 2014 at Lane Purcell Hospice House in Sumterville, Florida. Mr. Hirsh was born on November 1, 1951 in Auburn, New York to his parents Frederick L. Hirsh and Elizabeth (Patchett) Hirsh. Mr. Hirsh was a former Mechanic working for Ball Plastics in Baldwinsville, New York. He and his wife moved to Wildwood in 2010 from Baldwinsville, NY and was a former member of Central New York Bass Masters Club and Triple “E” Hunting Lodge both of New York. He loved to go fishing and hunting. He is survived by his loving wife of 42 years: Christine Hirsh of Wildwood, FL; three daughters: Charlene (Jeff) Goodman of Middle Island, NY, Kelly (Steve) Pulver of Commerce, GA and Nadia Papin of Wildwood, FL; five sisters: Hilda Calkins, Christine Phelps both of Baldwinsville, NY, Pauline Williams, Harriet Palmisano both of Syracuse, NY and Marianne Hirsh of North Syracuse, NY; a granddaughter: Kira Pulver of Commerce, GA and many loving nieces and nephews. Mr. Hirsh was preceded in death by his parents ,and his brother, Kendall P. Hirsh. Services have been entrusted to Page-Theus Funeral Home, Leesburg, FL. In lieu of flowers, the family request a donation may be made to any Hospice organization. On line condolences and memories may be shared by visiting www.pagetheusfuneralhome.com. Private Services to be held in New York at a later time.

The family of Frederick C. Hirsh created this Life Tributes page to make it easy to share your memories.

Send flowers to the Hirsh family.