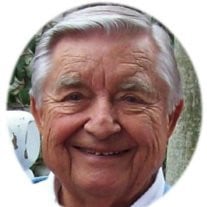 Eugene Alois Jarecki (Gene), age 91, of Leesburg, Florida passed away on November 16 surrounded by his loving family. Gene is survived by his wife of 54 years, Jane Arnold Jarecki of Leesburg, Florida. They have four daughters, Marie Huff (Mark) of Orange, California, JoAnne Groce (Matt) of Longwood, Florida, Patricia Pugh (Joe) of Richmond, Virginia, and Carol Ryan (Dan) of Winter Garden, Florida, and 12 grandchildren, Jacqueline, Adrienne and David Huff; Heather, Bethany and Jennifer Groce; Justin, Brandon and Dana Pugh; and Timothy, Jonathan and Katelyn Ryan. Gene was born in his home in Duncan (Platte County), Nebraska on November 5, 1922. Gene was the oldest of 10 children and is survived by his brother, Dominic Jarecki of Topeka KS and 6 sisters, Patricia Gomes of Baton Rouge LA, Dolores Filipowicz of Omaha NE, Janet Prunch of Omaha NE, Mary Ann Smith of Lee’s Summit, MO, Alice Crews of Independence MO and Teresa Rojas of Independence MO. He is preceded in death by his parents, Dominic and Amelia Jarecki of Duncan NE, and brothers, Father Reynold Jarecki and Joseph Jarecki. Gene grew up in Nebraska and attended the University of Nebraska with a degree in agricultural engineering, specializing in water resources. He worked with Hans Albert Einstein, son of Albert Einstein, on a research study the summer before he graduated. He also earned an MBA from Southeastern University in Washington DC. Gene was drafted in the Army Air Corps in 1943, where he received the rank of Sargent and was trained to fly a Taylor Craft, B-17 and B-29. He was on his way to Japan when WWII ended. Gene started his career working for the Department of Defense, where he worked in the Pentagon when it was first opened. As a hydraulic engineer, Gene worked for the Bureau of Reclamation, Great Lakes Basin Commission and the Federal Energy Regulatory Commission. He had the opportunity to work on one of the first computers in the 1950s. Gene represented the United States in France for a NATO-sponsored water resource planning conference. Gene was always active in many organizations, including national and local Professional Engineers, Toastmasters, Knights of Columbus, LAKEWATCH and serving on various committees in his community of Highland Lakes. Gene met his wife while skiing in Denver, Colorado where they were married and started their family. They moved to Ann Arbor, Michigan in 1968 and then to Alexandria, Virginia in 1979. After retiring, Gene and Jane relocated to Leesburg, Florida in 1994. They were able to travel quite a bit, visiting Alaska, New Zealand, Australia, Mexico, Hawaii, the U.S. West Coast, Canada and the Fiji Islands. They maintained a cabin in Skanee , on Huron Bay off of Lake Superior in the upper peninsula of Michigan, where they spent time every summer up until the last couple years as Gene’s health declined. Gene loved the outdoors and enjoyed camping, hiking, hunting and skiing. His lifelong passion for fishing started when he was very young fishing on the Platte River near his home in Nebraska. Gene taught his girls all how to fish as well as his 12 grandkids. After retiring, Jane and Gene were able to travel quite a bit and visited Alaska, New Zealand, Austria, Mexico, Hawaii, the west coast, Canada and the Fiji Islands. A memorial Mass will be held on Dec. 30 at The Catholic Community of St. Paul in Leesburg. His remains will be laid to rest in St. Stanislaus Catholic Cemetery in Duncan Nebraska in July. Donations may be made to Cornerstone Hospice in Traverse FL.

The family of Mr. Eugene Alois Jarecki created this Life Tributes page to make it easy to share your memories.

Send flowers to the Jarecki family.