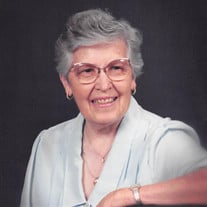 Eleanor Mae Tootle, 95, Murfreesboro, Tennessee, formerly of Leesburg, Florida went to be with the Lord on January 31, 2018 at the Tennessee State Veterans Home in Murfreesboro, Tennessee surrounded by her loving family. Mrs. Tootle was born on October 10, 1922 in Parrsboro, Nova Scotia, Canada to her parents Charles Harry Crowdis and Elsie (Fowler) Crowdis. She and her late husband were Farmers and worked at their farm at Bay Lake in Lake County until they retired in 1985 when they sold their farm. She was a proud U.S. Army Veteran who served in World War II as a member of the W.A.C. She was a former Pink Lady Volunteer at Leesburg Regional Medical Center working in the Thrift Store. She was a member of Eagles Nest Baptist Church in Fruitland Park, Florida. She met the love of her life in 1946 Calvin C. Tootle and was married to him for over 49 years until his passing in 1996. She is survived by her loving daughters: Niki Tootle of Readyville, TN and Jackie Tootle Johnson of Mt. Dora, FL; five grandchildren; 10 great grandchildren and four great-grandchildren. She was preceded in death by her loving husband Calvin C. Tootle, a daughter, Sandy Tootle Thomas and her two sisters: Eva Haris and Bea Dargie. Funeral Services will be held on Saturday, February 10, 2018 at 2:00PM at Page-Theus Funeral Home, Leesburg with Pastor J.W. Rowland Officiating. A Graveside Service will follow after the funeral at Shiloh Cemetery in Fruitland Park, Florida with Full Military Honors. A celebration of Life will be held prior to the funeral service from 12:00PM (Noon) till the hour of Service at Page-Theus Funeral Home. Online condolences may be shared by visiting www.pagetheusfuneral.com. Arrangements are entrusted to Page-Theus Funeral Home and Cremation Services, Leesburg.

The family of Eleanor Mae Tootle created this Life Tributes page to make it easy to share your memories.

Send flowers to the Tootle family.