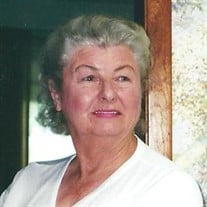 Dorothy L. Fillingham, 89, of Leesburg, FL, passed away peacefully at her home on December 29, 2014 surrounded by her loving friends. She was born on September 23, 1925 in Wyandotte, Michigan. She attended the Detroit Society of Arts, Michigan State, and Wayne State Universities. She had a love for horses and did trick riding in horse shows including the Michigan State Fair Rodeos. Dorothy met Tex Ritter, Leo Correlio, and Johnny Mac Brown and was offered an opportunity to become an actress, not only due to her horse riding ability for western movies but for her singing soprano voice as well. Dorothy was a soloist at St. Thomas Church in Trenton, MI. She loved to sing classical music. She played the organ, and was an artist specializing in oil paintings. She was a frequent volunteer at the Black Hills Wild House Sanctuary, founded by her good friend Dayton O. Hyde. She had been a donor to the institute of Range and the American Mustang club for several years. Ms. Fillingham retired from Michigan Bell Telephone Company as a staff manager in labor relations and personnel departments. She then moved to Florida in 1977 and became a member of the Lake Square Presbyterian Church of Leesburg, FL. Ms. Fillingham was predeceased by her loving parents, George and Marie Fillingham,nee,Plato, her sister, Isabel L.Scott, and a nephew, Barry Lee Scott. She is survived by her niece: Linda Masiewiez of KY; grand nephews: Scott Gillespie of KY and Jeffery Gillespie and several cousins and friends. A funeral service celebrating Ms. Fillingham’s life will be held on Friday, January 2, 2014 at 10:00 AM at Page-Theus Funeral home and Cremation Services ~ down town Leesburg. On line condolences and memories may be shared by visiting www.pagetheusfuneralhome.com.

Dorothy L. Fillingham, 89, of Leesburg, FL, passed away peacefully at her home on December 29, 2014 surrounded by her loving friends. She was born on September 23, 1925 in Wyandotte, Michigan. She attended the Detroit Society of Arts, Michigan... View Obituary & Service Information

The family of Dorothy L. Fillingham created this Life Tributes page to make it easy to share your memories.

Send flowers to the Fillingham family.