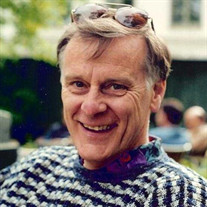 Donald Raymond Rasmussen, age 79, died in Leesburg, Florida at his winter home after a short illness. He was born in Staten Island New York City to Charles George Rasmussen and Dorothy Eunice (Olson) Rasmussen who raised 3 sons Robert Arthur, Allen Walter, and Donald Raymond. They also raised Charles George, Jr., son of Charles by a previous marriage. All are now deceased. The family left New York City and moved to Richfield Springs in upstate New York. In High School, he was a member of the wrestling team, played intramural basketball, played trumpet in the band, sang in the school choir and starred in the senior play. During his college years, he served as assistant in the Botany lab, sang in the a cappella choir, traveled with a gospel team as song leader and served a small local church as its pastor. In his freshman year at Houghton College, he met Ginny Allen who would become his wife. Following his college graduation and marriage he studied for the Christian ministry at Gordon Divinity School in Massachusetts where he received a Master of Divinity degree. During the summers in seminary Don and Ginny worked as staff members at Sandy Island YMCA camp in New Hampshire. In 1964 he was called to the position of Minister of Education at the Jackson Street Baptist Church in Scranton Pennsylvania where he served for 4 years, was ordained as an American Baptist Churches minister, studied at the University receiving a Master’s degree in counseling. Both sons, Stephen (1965) and Robert (1968) were born there. The family moved to Cranston Rhode Island where Don had been called to be the Associate Pastor of Phillips Memorial Baptist Church and seven years later, its Senior Pastor for the next 21 years. He entered a doctoral program at Andover-Newton Theological School and received a Doctor of Ministry degree specializing in organizational development. During his tenure at Phillips Memorial about a dozen persons entered the ministry and were seminary trained. Hosting elders who enjoyed having a group with which to journey led Don and Ginny to some wonderful experiences in Israel, Europe and Canada as caretakers, book keepers and friends. The Rasmussens hosted exchange students: Lars Asmussen, Denmark, Malin Ask Sweden, Daniel Gortzak, Sweden, and Ingela Stiller, Germany. In 1990 Don was given a 4-month sabbatical in Sweden to explore his Swedish roots and do Swedish language study. His involvements in Cranston included – membership of Cranston Community Action board; election to the Cranston School Committee; member of the Cranston Clergy Association; member of the Interfaith Leadership of Cranston, and the boards of the Cranston YMCA and Scandinavian Home. other involvements, interests, skills included – leadership in national denominational lab schools, workshops and youth conferences, mentoring/equipping leaders; church growth facilitator/developer. As a volunteer, he tutored in English as a Second Language with Literacy Volunteers of Rhode Island, worked with an after-school program tutoring children in computer use, volunteered at the American Baptist Historical Society in Atlanta, GA. He regularly swam, played tennis, and golf. He resigned from Phillips Memorial on December 1996 to serve his denomination as Regional Executive Minister for Rhode Island and board member on the national benefit and investment boards. The title of Pastor Emeritus on him was bestowed on him shortly after he resigned. He retired December 2006 and purchased a motor home in which he and Ginny traveled many happy miles. During that time, he served as interim Executive Minister for the American Baptist Churches of New York State. They purchased a winter home in Central Florida in April of 2016 where he died March 17, 2019. He is survived by his loving wife of 57 years Virginia (Allen), son Stephen Karl and his wife Deborah Lee (Cole), and their children Nathan Cole and Curtis Matthew Rasmussen, niece Portia Burnette, nephew Paul Burnette; son Robert Allen and his children Tristan Scout, Piper Tess, and Shepard Charles. A Memorial Service will be held at a later time in Rhode Island. Memorial gifts may be made to the following: · Phillips Memorial Baptist Church (music program) 565 Pontiac Ave, Cranston RI 02910 · American Baptist Churches of RI (Camping & Youth Ministries) 54 Exeter Rd, Exeter RI 02822 · Baptist Heritage Center, 54 Exeter Rd, Exeter RI 02822

The family of Donald R. Rasmussen created this Life Tributes page to make it easy to share your memories.

Send flowers to the Rasmussen family.