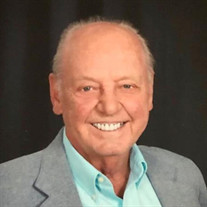 Donald “Curtis” Jones, 84, The Villages, Florida passed away in the wee hours of the New Year at The Villages Florida Regional Hospital. “It’s A Beautiful Day In The Villages” is his recorded phone greeting you’ll receive upon calling their home, and as a 17 year resident, Curtis believed it. Retired Career Military USAF, Curtis was born on July 24, 1936 in Harriman, Tennessee to parents James Baxter Jones and Lyda Elizabeth (Thomas) Jones who hosted family get-togethers that would make The Hallmark Channel envious. A Veteran of both the Korean and Vietnam Wars, Curtis and wife, Linda, with two kids in tow, traveled the world – square dancing under the Eiffel Tower in Paris, wandering the Castles of England, not-skiing the mountains of Bavaria and growing banana trees in Honolulu. Curtis was life-long strong in the Christian faith, a servant leader and member of Fairway Christian Church, The Villages, Florida. Curtis and Linda relocated to Florida from “The Great State of Tennessee” – and if you knew Curtis, you could hear him say just that; he was a Son of Tennessee and without a doubt the world’s biggest University of Tennessee Volunteers fan, teaching his children that whoever gets across the Tennessee state line first, wins. Survived by loving wife of 62 years, Linda Jones; a son: Randy Jones and wife Farris of Montgomery, AL; a daughter: Tamela Coval with Scott Lippman of Atlanta, GA. His sister Gwen Dunaway arrived in Heaven first, and he is also survived by three brothers and families he dearly loved: Bobby & Phyllis Jones of Crossville, TN, Larry & Louise Jones of Lenoir City, TN and Mickey & Kathy Jones of The Villages, FL. (A note to the brothers...Dad’s assignment with the CIA is still under wraps.) Known as a long-winded, Southern-voiced storyteller, lovingly called “Grandaddy”, Curtis was proud of his four grandchildren - he was the one to teach most of them how to ride a bike, fish and yell, “Go Vols!”: Grandchildren are Britni Miltner and her husband Keith, Ian Johnson, Kelley Crestwell, Cameron Coval, Caroline Coval and Great-Granddaughter: Genevieve Miltner. He was “Uncle Curt” to many loving nieces and nephews. To all who know him, he was a man of great faith and knew to Whom he belonged. A Celebration of Curtis’s Life will be held in the early fall in the place he loved best, the Great Smoky Mountains of Gatlinburg, when “It’s Football Time in Tennessee”. Online condolences may be shared by visiting www.pagetheus.com. Arrangements are entrusted to Page-Theus Funeral Home and Cremation Services, Leesburg, FL.

The family of Donald Jones created this Life Tributes page to make it easy to share your memories.

Send flowers to the Jones family.