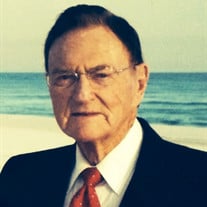 Donald Leroy Foreman age 93, passed away Sunday, April 13, 2014 in Leesburg, Florida. He was born in Vancouver, Washington and moved to the Leesburg area in 2002 from the Oakland/San Francisco Bay area where he had lived for over 22 years. He was a Navy Carrier Pilot during World War II and the Korean War and he also served as a backup pilot for the Blue Angels Squadron. During his time as a fighter pilot he saw many battles and engagements, in the Pacific area, and even though he went on to live a life bursting with excitement and great achievement his true love was always his time piloting in a Navy Corsair. At the end of the Korean War he left the Navy and became the Stadium Manager for the New York Yankees (1953). He confessed to knowing little about baseball and stadiums at the time, but he had a keen intellect and a God given gift for planning and logistics which made him a perfect fit for such a position. Opportunity persuaded him to leave the New York Giants to serve as the Manager of Love Field Airport in Dallas, TX where he would also manage the American Airlines Stewardess College. In 1964 Baseball came calling again and he was recruited by Walter O’Malley to come to California and build Dodgers Stadium as Director of Stadium Operations for both the Angles and the Dodgers for five years. Don was asked to come to Oakland, California to be the Director of Stadium Operations for the Oakland Alameda County Coliseum during some of the most exciting playoffs and World Series in history. He oversaw the enormous operation which hosted big stage shows by Frank Sinatra, The Beatles, The Rolling Stones, and Michael Jackson as well as sporting events often on the same day. He would go on to become Stadium Manager of Candlestick Park for the San Francisco Giants and went on to become Vice President of the San Francisco Giants, a position he held until retirement. His retirement proved to be as exciting as his working life. He and his wife Helene literally traveled and “Cruised” the entire globe more than once experiencing some of the most beautiful and astounding sights on the earth. In recent years he enjoyed building models of the airplanes he once flew and assembling countless jigsaw puzzles depicting places of his travel. He leaves behind to cherish his memory his loving wife and companion of almost 64 years – Helene, Son – Dr. Douglas Scott (Rosalyn) Foreman of Warwick, RI; Daughter – Kimberly Ellen Foreman of The Villages, FL; 4 Grandchildren – Douglas Scott Foreman, Jr.; Kevin Robert Bartholomew; Jeffery Donald Bartholomew; and Jill Ashley Foreman; and 2 Great-Grandchildren – Seth Hunter Bartholomew and Owen Scott Foreman. A service with Full Military Honors will be held at Florida National Cemetery, Bushnell, Florida at a later date.

Donald Leroy Foreman age 93, passed away Sunday, April 13, 2014 in Leesburg, Florida. He was born in Vancouver, Washington and moved to the Leesburg area in 2002 from the Oakland/San Francisco Bay area where he had lived for over 22 years.... View Obituary & Service Information

The family of Donald Leroy Foreman created this Life Tributes page to make it easy to share your memories.

Send flowers to the Foreman family.