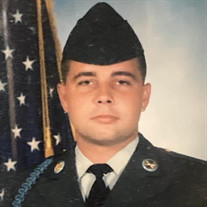 Dennis Wayne Perkins, age 51, passed away in Largo, FL on Friday May 13th 2022. Dennis was born in Dayton, OH on August 23rd, 1970, to David P. Buhrman and JoAnne Elliot Collins. He later moved to Central Florida where he finished high school. Dennis went on to enlist in the U.S. Army where he trained to be in the 75 Airborne Ranger Regiment. Dennis was enlisted from 1994-1995 and was awarded the U.S. Army Service Ribbon. He would marry in October 21, 1995 to his former spouse and best friend, Jennifer L. Perkins for 27 years. Together, they had two beautiful and courageous daughters, Alexandria Taylor Perkins and Madison Kaeleigh Perkins. He was a wonderful and supportive husband, father, and friend. He was a gifted writer and artist. Dennis also had a great sense of humor; he also had an intelligent and deeply profound mind. He later moved to Mississippi where he finished technical school and became a licensed First Class Pipe Fitter, and he had built a beautiful home with his family. Shortly in 2005, hurricane Katrina hit Mississippi and destroyed their home. Therefore, he returned to Florida where he and his brother, Cliff, started up a very successful painting company. Dennis was a wonderful son, brother, husband, and father. He was a loving and kind man with a heart of gold. Dennis was a determined and strong fighter throughout life. Dennis was proceeded in death by his Great-Grandpa and Great-Grandma, Ernie and Lutie Perkins; Grandpa and Grandma, Delmar & Ermal Perkins; Uncle and Aunt, Don and Judy Perkins. He is survived by his two daughters, Alexandria Taylor and Madison Kaeleigh Perkins, his brother, Clifford Douglas Elliott (spouse, Tami); stepbrother, John Douglas Elliott (spouse, Toni); his nephew, Jacob Douglas Elliott; two Aunts, Brenda C. Rodgers (spouse, Tony) and Polly A Efaw (spouse, Terry); Great-Aunt, Josie Moon; Great-Uncle, Ernie Sharp; and many cousins including: Donnie Perkins (spouse, Rene), Kelly Downard (spouse, Zach), Melissa Wilhelm (spouse, Tim) and Ginger Griffin. He will be deeply missed.

The family of Dennis Wayne Perkins created this Life Tributes page to make it easy to share your memories.

Send flowers to the Perkins family.