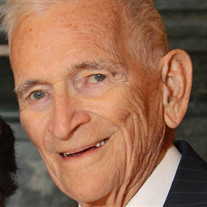 David Leon Megchelsen, 91, Lady Lake, Florida went to be with the Lord on November 24, 2014. Mr. Megchelsen was born on June 16, 1923 to his parents Herbert and Florence Megchelsen in Ft. Madison, Iowa. David and his wife Wilma moved to Lady Lake, Florida, in 1992 from Plainfield, Illinois. He was a member of Immanuel Baptist Church in The Villages, Florida. David was the National Training Director for Dun and Bradstreet Corporation for 45 years. Mr. Megchelsen was a proud patriot and an American hero. He entered into the Army Air Corps on March 5, 1943 in San Francisco, California. He achieved the rank of Staff Sergeant and served in World War II in the Pacific Theatre. David was the radio operator on a B-29 Bomber and flew 35 missions over Japan from a base on Saipan in the Mariana Islands. He was a recipient of the Distinguished Flying Cross. David enjoyed model railroading, and had a great passion for gardening. His greatest passion of all was his family. David had an unparalleled love and care for his wife Wilma and absolutely adored his three children. He is survived by his loving wife of 68 years, Wilma L. Megchelsen, of Lady Lake, Florida; three children, Marsha (Reverend Dr. Paul G.) Thyren, of Hingham, Wisconsin; David Barry Megchelsen of Wheeling, Illinois; Melanie (Reverend Glenn M.) Pav of Largo, Florida; ten grandchildren; fourteen great-grandchildren; and many nieces and nephews. A Visitation will be held on Tuesday, December 2, 2014 at Immanuel Baptist Church, The Villages, Florida from 9:00 - 10:00A.M with a memorial service to follow at 10:00 AM. A family graveside service with full military honors and a 21-gun salute will follow at the Florida National Cemetery. If you prefer to make a donation in lieu of flowers the family requests donations be made to Immanuel Baptist Church located at 8015 SE 180th St. (CR 102), Oxford, Florida 34484. Services entrusted to Page-Theus Funeral Home, Leesburg, Florida. Online condolences and memories may be shared by visiting www.pagetheusfuneralhome.com.

David Leon Megchelsen, 91, Lady Lake, Florida went to be with the Lord on November 24, 2014. Mr. Megchelsen was born on June 16, 1923 to his parents Herbert and Florence Megchelsen in Ft. Madison, Iowa. David and his wife Wilma moved to Lady... View Obituary & Service Information

The family of David L. Megchelsen created this Life Tributes page to make it easy to share your memories.

David Leon Megchelsen, 91, Lady Lake, Florida went to be with...

Send flowers to the Megchelsen family.