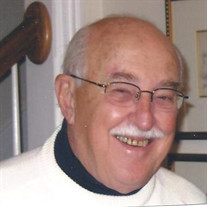 Carl Joseph Fimmano, 83, Leesburg, FL. passed away on March 18, 2015 at The Villages Hospice House, under the loving care of his family and staff. Carl was born July 15, 1931 in Utica, New York, to Carl and Flora Fimmano. His professional work was filled with many challenges and much travel, mainly to Japan. He worked as Director of Advanced Procurement for the National Broadcasting Company (NBC) in New York City. Rockefeller Center was his home away from home. He was privileged to work on two Olympic Games, Barcelona being the most recent in 1992, where he proposed to his wife. Carl and Lynn moved to The Plantation at Leesburg from Stamford CT, and spent the next 22 years loving every moment. Enhancing the Plantation was a huge priority. Some of the projects on which Carl worked include: the Plantation Hurricane Preparedness program, reopening of the Firehouse adjacent to the Plantation (1998), the traffic light on the corner of route 27 and Plantation Blvd, contract negotiations for geo-thermal heating of Ashley pool, negotiations for the opening of the Lake County Sherriff’s Satellite Office, participated in the Plantation Memorial Park programs, President of the PRO Board, Director on the HOA Board, transition of the Plantation from developer to residents, a founding member of theatrical group, M.C. for many events held within the Community (he loved the microphone), Relay for Life, Adopt a Family Program, and so much more. Carl was a member of St. Paul Catholic Church in Leesburg, the Knights of Columbus, Council # 5644 of Leesburg, FL. and the Plantation Italian American Club. Carl loved golf, darts, music (he was a disc jockey in his younger years), dancing, and just being involved. He was recently recognized by the community for all his efforts, receiving the Bette Baeshore Humanitarian Award (2015) for his selfless dedication to others. Carl is survived by his loving wife Lynn, who shared 30 wonderful years with her husband. Carl is also survived by three loving stepsons: Ralph (Dian) Ganeles of Colorado, Jimmy Ganeles of Florida, and Mark Ganeles of Washington State; two grandchildren: Kali and Mady Ganeles, and several nieces and nephews. In lieu of flowers the family has requested donations be made to Cornerstone Hospice of The Villages, or The American Cancer Society. A memorial service will be held at the Plantation at Leesburg on April 9 at 10:30 am.

Carl Joseph Fimmano, 83, Leesburg, FL. passed away on March 18, 2015 at The Villages Hospice House, under the loving care of his family and staff. Carl was born July 15, 1931 in Utica, New York, to Carl and Flora Fimmano. His professional work... View Obituary & Service Information

The family of Carl Joseph Fimmano created this Life Tributes page to make it easy to share your memories.

Send flowers to the Fimmano family.