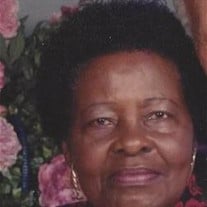 Beulah Daniel was born on September 13, 1923 in Chili, Georgetown, St. Vincent to Daisy Amanda and Bucky Simmons. Beulah immigrated to Trinidad where she met and married Vernon Daniel who passed away in March 2008. They were married for over 60 years. Beulah had four children, Brenda, Lennox, Anne-Marie and Yvonne. In Trinidad Beulah was a stay-at-home mother occasionally working simple jobs, but dedicated to taking care of her children at home. She was a good seamstress and made beautiful dresses, mainly for her two daughters who attended St. James Anglican Church, Port-of-Spain, Trinidad. Beulah immigrated in 1962 to Harlesden, London, England. Her children and husband followed thereafter. Beulah was employed at British Railways for many years. She was an ardent traveler and had a passion for the good life. Aspiring to do better for herself and her family, she immigrated once again to the United States in the mid 1960's. It was her hope she would find better opportunities than she had in London, England. Beulah settled in Brooklyn, New York and found employment in various jobs in New York. She was later able to sponsor her children and their family who also immigrated to the United States of America. Beulah enjoyed a good life with her husband, children, and their families. She also was thankful for the friends she met through her travels and employment. Once retired, she built a house with her husband and moved to Lady Lake, the Villages, in Florida. She enjoyed living with her husband in the Villages from 1991 through 2008. After her husband passed in 2008 she was unable to take care of herself so she relocated to Palm Bay, Florida in the care of a family member. She became ill after many years and was moved to Atlantic Shores Nursing Home, Melbourne, Florida where she remained for four years. Unfortunately, she took ill again and was admitted to Palm Bay Hospital where she passed away on June 4, 2014. Beulah leaves to mourn her children, daughters, Brenda, Anne-Marie and Yvonne, son, Lennox, grandchildren, Curt, Allison and Nigel Chapman, Ashona, Philip and Natasha Daniel, Alison St. Louis and Stephen Mills, Mark and Kim Crowther, Nicolette Smartt, niece, Veta Sutherland, son-in-laws, Eglan Norman, Keith Crowther and Karl Mills, also 26 great grandchildren too numerous to name, and 4 great-great grandchildren. Also to acknowledge Lesly St. Louis and Dwight Smartt and very good friend Queenie (Esther) Taylor. BEULAH DANIEL’S FUNERAL ARRANGEMENTS Beulah's home going is on 6/14/2014 at Hillcrest Cemetery, Leesburg, Florida. May you rest in peace as you journey to be once again with your beloved husband, Vernon. Viewing (Friday, June 13, 2014, Time 6-8pm) Page-Theus Funeral Home 914 W. Main Street Leesburg, FL 34748 Service (Saturday, June 14, 2014, Time 11am) St. James Episcopal Church of Leesburg, Florida with the Rev. Thomas Trees officiating. Interment (Saturday, June 14, 2014, Time 12:30pm) The interment will be at Hillcrest Memorial Gardens, Leesburg, Florida at 12:30pm

Beulah Daniel was born on September 13, 1923 in Chili, Georgetown, St. Vincent to Daisy Amanda and Bucky Simmons. Beulah immigrated to Trinidad where she met and married Vernon Daniel who passed away in March 2008. They were married for over... View Obituary & Service Information

The family of Beulah Ena Daniel created this Life Tributes page to make it easy to share your memories.

Send flowers to the Daniel family.