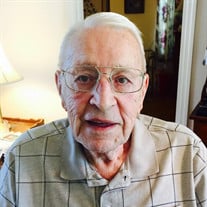 William C. Steger August 19, 1927 to November 7, 2017 William (Bill) C. Steger, Jr., age 90, went to be with the Lord on November 7, 2017. William was born on August 19, 1927 in Chicago, Illinois to his parents, William and Alvilda (Toots) Steger. He served in the United States Navy from 1945 to 1948 during which time he married Geraldine (Jerry) M. Sandefur. In 1948 he began employment at Illinois Bell Telephone Company in Chicago. He began as a lineman, climbing telephone poles, and worked his way up to District Plant Manager supervising hundreds of employees. Among other achievements, William received a patent for a telephone system he invented at Bell Lab. He retired from the Bell System in 1982 at age 54. In 1983, Bill and Jerry retired to Jerry’s home state of Florida, where Bill was able to devote much of his time to helping folks with their electrical needs. He got his electrician’s license, and also worked for Habitat for Humanity. Bill moved to Leesburg in 2004 and became a member of Southpointe Baptist Fellowship. He became an avid horseshoe pitcher and continued his lifelong love of gardening and helping anyone in need. In 2015, the love of his life and wife for 68 years, Jerry, went to be with the Lord. This past summer, Bill’s children, grandchildren and great-grandchildren gathered in Leesburg to celebrate his 90th birthday. Bill was a larger than life person, extremely talented and hardworking, funny and fun-loving, and committed to his Lord, his family, and a world in need. He is survived by his son, William (Karen) Steger of Bolingbrook, Illinois; daughter, Patricia (Tom) Slezak of Leesburg, Florida; granddaughters, Michelle (Eric) Mandley of Bolingbrook, Illinois; Elizabeth (Eric) Kimble of Plainfield, Illinois; Katie (Jared) Haggard of Fort Worth, Texas; Lara (Steven) Hoefelmann of Weatherford, Texas; twelve great grandchildren; sister, Marge Weadley of Schaumberg, Illinois; and many nieces and nephews. Visitation will be held on Sunday, November 12 from 4:00 to 6:00 p.m. at Page-Theus Funeral Home located at 914 W. Main Street, Leesburg, Florida. The funeral will follow on Monday, November 13 at 1:00 p.m. In lieu of flowers, donations in memory of William C. Steger may be made to The Fellowship church at 25900 US Highway 27 in Leesburg. Online condolences and memories may be shared by visiting www.pagetheusfuneralhome.com.

The family of William C. Steger Jr. created this Life Tributes page to make it easy to share your memories.

Send flowers to the Steger family.