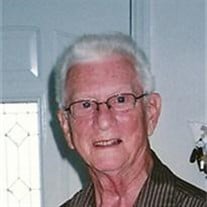 Mr. William J. Roemmelt, of Leesburg, FL, passed away on Wednesday, March 02, 2011, at the age of 81 years.  He was born in New York City on March 9th, 1929, the son of German immigrants, Adolph and Margaret Roemmelt.  As a young boy growing up, he spent much of his time on a farm in upstate New York with friends of his parents.  At the early age of 17, he left home.  Shortly after, he joined the US Navy during the Korean War.  He was stationed out of Norfolk, VA as a Radioman on the USS Taconic, (AGC-17/LCC-17), an Adirondack class amphibious force command flagship, a floating command post with advanced communications equipment and extensive combat information spaces.After his discharge from the Navy, he returned to Brooklyn and married Anna Mae Hawd.  They had nine children.  Bill went to work for the FW Woolworth Corporation for the next 30 years.  They lived in Brooklyn and raised their family.  Working in retail, his time home was limited, often working late and doing what was necessary to support his large family.  When he came home from work he often greeted us with a small gift asking “And what’s your name?”, before he would relinquish it.  His time at home was often consumed repairing things that his children broke through the week.  He was proud of what he had and worked hard to maintain it. He enjoyed the outdoors and would take family vacations to Lake Tiorati in Harriman State Park and Peach Lake in New York.  He enjoyed camping, fishing and especially hunting, characteristics he instilled in his children.  He loved to go small game hunting on Hunter Mountain for snowshoe rabbits and deer hunting in Parksville, NY. In 1978, his wife Anna passed away unexpectedly.  In 1979, he married his second wife, Denise.  He moved upstate to Montgomery, NY shortly after, with his mixed family of his two youngest sons and a step-daughter.  A few years later, after a downsizing of the FW Woolworth Corporation, he found himself unemployed.  Bill purchased and operated a Montgomery Ward Catalog Store in Ellenville, NY.  He ran the store for several years until Montgomery Ward went out of business and eventually forced the closing of the store.  He was hired by Alos, a microfiche company in Montgomery, owned by a friend, where he worked until his retirement. He and his wife Denise relocated to Middletown, NY, where they lived for several years prior to their relocation to Leesburg. FL.  They purchased a house in the Plantation.  Bill enjoyed his time there.  Unable to hunt due to his health, he tried to stay active and joined the Archery Club.  He and Denise enjoyed each others company until she passed away suddenly in 2009 after an accident.   In 2010, he met Alice Kugel at the Plantation and they were married in September.  Unfortunately, his 11 year battle with lung cancer finally overtook him, shortly after there marriage.  He fought hard the whole way through 2 surgeries, radiation and endless chemotherapy treatment and never lost hope or his wonderful sense of humor. He was a wonderful grandfather to his two grandchildren in Florida, Rachel and Megan.  He is remembered by his wife, Alice Kugel of Leesburg; his children, Denise (Eddie) Stoltzenberg of Staten Island, NY, Debra (Brian) Friedland of Merrick, Long Island, NY; Michael (Anneliese) Roemmelt of Middle Village, Queens, NY, Diane (Steven) DuBritz of Holbrook, Long Island, NY, James (Tina) Roemmelt of Middle Village, John (Laura Anne) Roemmelt of Deltona, FL and Thomas (Rita) Roemmelt of Mount Vernon, NY, 16 grandchildren; Nicole Friedland, Jason Friedland, Kelly Anne Roemmelt, Mike Roemmelt, Jake Roemmelt, Christina DuBritz, James DuBritz, Elizabeth Roemmelt, James Roemmelt, Daniel Roemmelt, Luke Roemmelt, Rachel Anne Roemmelt, Megan Riley Roemmelt, Thomas Roemmelt, Kaitlyn Roemmelt and Emily Roemmelt and 5 step-children. Friends are invited to gather for viewing on Friday, March 4, from 4:00 – 6:00 pm with a funeral service starting at 6:00 pm in the funeral home chapel.  Burial will be in Long Island National Cemetery, Farmingdale, NY.  In lieu of flowers, the family suggests donations in his name to Hospice of Volusia/Flagler, 1625 Veterans Memorial Parkway, Orange City, FL 32763.  Arrangements are entrusted to Page-Theus Funeral Home & Cremation Services, Leesburg, FL, 352-787-5511.  Condolences may be left for the family through our website – www.PageTheus.com

Mr. William J. Roemmelt, of Leesburg, FL, passed away on Wednesday, March 02, 2011, at the age of 81 years.  He was born in New York City on March 9th, 1929, the son of German immigrants, Adolph and Margaret Roemmelt.  As a young boy growing... View Obituary & Service Information

The family of William J Roemmelt created this Life Tributes page to make it easy to share your memories.

Send flowers to the Roemmelt family.