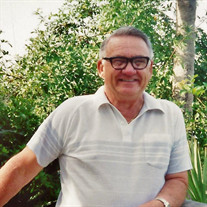 William “Bill” Earl Ford age 91, passed away Wednesday, February 1, 2017 at Emory L. Bennett State Veteran’s Memorial Nursing Home in Daytona Beach, Florida. Bill was born and raised in Daytona Beach and played football for Mainland High School where he graduated in 1942. After high school he joined the U. S. Navy during World War II and served 2 years before joining the U. S. Army and served over 20 years as a Drill Instructor and an Air Traffic Controller retiring at the rank of First Sargent. After retiring he returned to Daytona Beach to serve as a Assistant Flight Director at Embry Riddle Aeronautical University for three years before taking another Air Traffic Controller position with Pan Am where over 20 years he worked on Ascension, Antigua, Grand Turk, Eleuthera and Grand Bahamas Islands. When asked about his time on the Island Bill’s standard reply was always “It was pretty hard spending all that time fishing and playing golf, but someone had to do it.” Those close to Bill will always remember his love of people, his joking banter and the twinkle in his eye. Bill was a longtime member of Daytona Christian Church, where he served as a Deacon and Elder through the years. Bill was predeceased by his first wife Doris in 1990 and his sons Michael and Stephen Ford, and granddaughter Phyllis Annette. He leaves behind to carry on his memory his loving wife of 18 years Deanna Carter Hand Ford of Port Orange, Florida; Sons-Martin (Candy) Ford of South Daytona; and Kenneth (Lori) Ford of Edgewater; Daughters – Sharon (Steve) Driggers of Palatka, FL; and Phyllis (Brian) McGregor of DeLand; daughter-in-law Debbie Ford of Oregon; Step-Children – Brian Hand of Port Orange; and Beverly (Jimmy) Hand Semesco of Leesburg, FL; Sister – Gertrude Gillen of Asheville, North Carolina, 9 grandchildren and 12 great-grandchildren, and 4 great-great grandchildren, and many nieces and nephews. A memorial service celebrating Bill’s life will be held on at the Daytona Christian Church 11:00 A. M. Friday, February 10, 2017. All arrangements are under the careful direction of Page-Theus Funeral Home, Leesburg, Florida.

The family of William Earl "Bill" Ford created this Life Tributes page to make it easy to share your memories.

Send flowers to the Ford family.