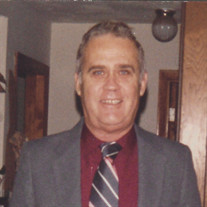 William “Bill” Douglas Correll, 89 of Leesburg, Florida went to be with the Lord on April 10, 2021 at home with his loving wife by his side. Bill was born March 6, 1932 in Spring City, Tennessee. He proudly served 14 years in the US Air Force as a Staff Sergeant. He served in the Vietnam War, Korean War and WW2. He retired from the City of Leesburg where he worked for many years. He was a member of Trinity Assembly of God in Fruitland Park where his Sunday morning routine included his special stool in the café with a hot cup of black coffee. He always had a big smile on his face to greet the church members and a hug for his special ladies. Bill was an avid motorcycle rider and owned many Honda Shadows in his lifetime. He enjoyed riding around town, to church and to many Daytona Bike Weeks as well as Leesburg Bike Fests. You could find Bill most days in his chair, cracking and eating pecans and watching the birds out front or sitting on the back porch watching his boys, Dalton and Ryder playing out back in the dirt. He also enjoyed piddling around in the barn and working in the yard cleaning up sticks so Jewel could mow. He was her muscle man and her “Honey”. Bill was a family man. He enjoyed family gatherings to tell stories and laugh. He ALWAYS had stories of the wars to tell from his experiences and he loved to tell about the many maps he created. During his last days on Earth, Bill told Jewel, “A slow man married a fast woman”. This summed up their marriage. He was a slow moving and slow talking man, and she was just the opposite, she was fast at all she did. They evened each other out and that showed to anyone that knew them. Bill had many friends and will be missed greatly by his family and friends. Bill was preceded in death by his daughter: Debbie Watson (2014) and granddaughter: Ashley Correll (2019). Bill is survived by his loving wife of 52 years: Jewel Correll of Leesburg, FL; two children: Penny Feagle and her husband, Jimmy, of Leesburg, FL; Doug Correll and his wife, Kelly, of Lawrenceville ,GA; six grandchildren: Melissa Denham, Steven Correll, Jenna Farrugia, Richard Watson and Nancy Stevens; six great-grandchildren: Dalton, Ryder, Michael, Wesley, Henry and Eric.

The family of William Douglas Correll created this Life Tributes page to make it easy to share your memories.

Send flowers to the Correll family.