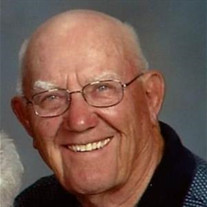 Mr. William Bockmiller age 89 passed away Thursday, April 2, 2015 in Leesburg, Florida. He was born in Detroit Michigan and moved to the Leesburg area 32 years ago from Illinois. Before retiring to Florida he was an executive in the Manufacturing industry and held key positions with Rockwell International, Hyster, and Illinois Tool Works. He was a longtime and active member of St. Mark’s Lutheran Church in Leesburg, Florida. Bill was a Veteran of the U. S. Navy and served in the Philippines during W. W. II. Those close to Bill will remember him for his giving, kind and friendly nature and his willingness to help anyone in need. He was also known for his great sense of humor and quick wit. He loved to golf and fish but most of all he loved spending time with his loving wife Ginny and his family. He leaves behind to cherish his memory his wife of 67 years – Ginny; a daughter – Beverly Robinson of Ft. Lauderdale; son – Michael Bockmiller of New Port Richey; 2 sisters – Bess Grucz of Pontiac, MI; and Ann Schaur of Grand Rapids, MI; 5 grandchildren – Jeff, Chris, Ryan, Chelsea, and Aaron; and 1 great-grandchild McKenna. A memorial service is planned for 11:00 A. M. Monday, April 13, 2015 at St. Marks Lutheran Church with Pastor David Rosenau serving as Officiant. Inurnment with Navy Honors will take place at Florida National Cemetery Bushnell, Florida at 2:00 P. M. The family suggests that memorial contributions be made to: The American Red Cross - P.O. Box 4002018, Des Moines, IA, 50340-2018 or The American Cancer Society - P.O. Box 22718, Oklahoma City, OK 73123-1718 Arrangements have been entrusted to Page-Theus Funeral Home and Cremation Services Leesburg, Florida

Mr. William Bockmiller age 89 passed away Thursday, April 2, 2015 in Leesburg, Florida. He was born in Detroit Michigan and moved to the Leesburg area 32 years ago from Illinois. Before retiring to Florida he was an executive in the Manufacturing... View Obituary & Service Information

The family of William "Bill" Bockmiller created this Life Tributes page to make it easy to share your memories.

Send flowers to the Bockmiller family.