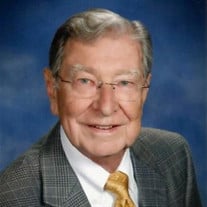 Wayne (Duff) Kennedy McGatrey, 89, formerly of Clifton Park, New York Passed away on November 14, 2014. Duff was born in Wilton, New York, November 1, 1925 to the late William K. and Dolores P. McGatrey. He was a graduate of Saratoga High School, Class of 1943. Upon graduation, he enlisted in the U. S. Navy and served our country during the height of W.W. II. Upon his return he was employed by New York Telephone Company (Verizon) enjoying a distinguished 38 year career from 1947 until his retirement in 1985. He is survived by his wife of 40 years, Karen W. McGatrey, two daughters, Jill Hofstra of Hempstead, NY and Deborah Lovinsky of Chery Hill, NJ, 6 grandchildren and 9 great-grandchildren. He was a member of the Masons and the Elks. The McGatrey’ s are members of Morrison United Methodist Church and Duff leaves a wonderful circle of close friends. Memorial contributions, in his memory, may be made to Cornerstone Hospice, 2445 Lane Park Road, Tavares, Florida 32778 or Morrison United Methodist Church, 1005 W. Main Street, Leesburg, Florida 34748. Arrangements are under the careful direction of Page-Theus Funeral Home and Cremation Services – Leesburg, Florida.

The family of Wayne (Duff) Kennedy McGatrey created this Life Tributes page to make it easy to share your memories.

Send flowers to the McGatrey family.