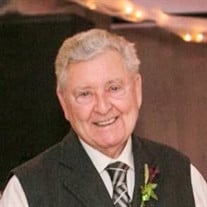 Walter D. “Dave” Williams, 87. Leesburg, Florida passed away on February 14, 2016 in Leesburg, FL. Mr. Williams was born on January 24, 1929 in Birmingham, Alabama to his parents John Walter Williams and Agnes Katherine (Gardiner) Williams. Mr. Williams worked for General Motors Tech Center for over 36 years. He and his wife Helen moved to Leesburg in 1994 from Roscommon, Michigan. He was a member of St. James Episcopal Church in Leesburg, FL. He enjoyed singing and had been involved in a Barbershop Quartet Group in Michigan as well as being in the Choral Group at Pennbrooke Fairways. He is survived by his loving wife of 63 years: Helen Williams of Leesburg, FL; two daughters: Nancy (Michael) McKenna of Deltona, FL and Karen (Michael) Zielke of Chuluota, FL; a son: Brian (Susan) Williams of Troy, MI; a daughter-in-law: Brenda Williams of O’Fallon, MO; a brother: Richard Williams of Mexico; eight grandchildren: Julia, Alex, Cody, Rachel, David, Michael, Mitchell and Kendall and several nieces and nephews. He was preceded in death by his son Timothy Williams. A Celebration of Life Memorial Service will be held on Monday, February 22, 2016 at 11:00AM at St. James Episcopal Church, Leesburg, Florida. In lieu of flowers the family requests donations be made to either St. Elizabeth Episcopal Church at P.O. Box 517 Roscommon, MI 48653 or St. James Episcopal Church at 204 Lee Street Leesburg, FL 34748 Services have been entrusted to Page-Theus Funeral Home, Leesburg, FL. On line condolences and memories may be shared by visiting www.pagetheusfuneralhome.com.

The family of Walter D. "David" Williams created this Life Tributes page to make it easy to share your memories.

Send flowers to the Williams family.