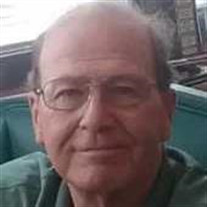 Vincent Charles Sanguedolce, age 69, of Leesburg, formerly of Cleveland, OH, passed away on September 5, 2018 in Clermont, FL. Vince was born May 30,1949 to Vincent and Katherine (Swerk) Sanguedolce. Vince moved to Leesburg in 2008 where he married Elizabeth Davis on December 23, 2008. During High School in Maple Heights, OH, Vince was a wrestler and on the state championship team for two years. Vince was a proud Viet Nam veteran who served with honor and dignity as a combat infantryman in the US Army, 196th Infantry Brigade. He was awarded the bronze star, CIB, and purple heart and airborne jump wings, for combat operations at Hep Duc, RVN. He loved his country dearly, as well as his fellow veterans. He was a carpenter and a truck farmer for much of his career. His partners in life were his beloved wife Elizabeth and his two German Shepherds, Haiko and Jenny. He is survived by his step children Paul and Wendy Blumenschein, sister Debbie Babey, nephew and niece Eric and Rachel Krueger, brother in law Roland Krueger. His brother Robert Babey and mother proceeded him in death. Vince had the unique distinction of climbing all 53 mountain peaks of 14,000 feet in Colorado over a 10 year period. He was a member of the VFW, American Legion, DAV, VVA, AmVets, Eustis Gun Club, where he was a range safety officer, and Fraternal Order of Eagles Lake County Aerie 4273. In lieu of flowers, donations can be made to St. Jude Children's Research Hospital.

Vincent Charles Sanguedolce, age 69, of Leesburg, formerly of Cleveland, OH, passed away on September 5, 2018 in Clermont, FL. Vince was born May 30,1949 to Vincent and Katherine (Swerk) Sanguedolce. Vince moved to Leesburg in 2008 where he... View Obituary & Service Information

The family of Vincent Charles Sanguedolce created this Life Tributes page to make it easy to share your memories.

Send flowers to the Sanguedolce family.