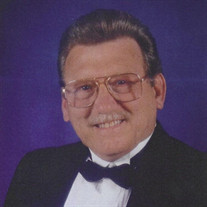 Tony Martin Cheesebrew, Sr., CWO4, U.S. Navy (retired) of Leesburg, Florida, age 75, went to be with the Lord on February 8, 2019. He was the devoted husband for 56 years to loving wife Linda K. (Hunt) Cheesebrew of Berwyn Heights, MD, dearest father to sons Tony Jr. of California, MD and Christopher “Scott” and his wife Amy of Winter Garden, FL and the proud grandfather of Matthew and Alexandra Cheesebrew. He was preceded in death by his parents John S. Cheesebrew and Pearl V. (Martin) Cheesebrew; five brothers Gerald, Tensil “Pete”, Sammie, John “Red”, and Richard, and one sister Virginia. He is survived by one brother James of Point Pleasant, WV and two sisters Claudette (Jane) and Linda of Columbus, OH. Mr. Cheesebrew began his distinguished U.S. Navy career in 1960 where he would proudly serve 26 years before retiring. While advancing through the ranks of all nine enlisted pay grades, and three commissioned officer pay grades; he earned numerous personal unit, and campaign medals and citations for his meritorious and professional accomplishments. Mr. Cheesebrew proudly served our country during the Viet Nam War and Cold War hostilities throughout the Atlantic and Pacific Theaters of Operations. He was an aviation enthusiast and truly enjoyed aircraft maintenance and aircrew duties while flying in the Navy’s P-3 Orion aircraft as a Flight Engineer. After his retirement from the U.S. Navy, he continued a pursuit of enhancements to aviation technologies and patriotism for our country by remaining in the national defense industry. He was employed as a Regional Manager by Columbia Research Corporation (CRC) and as a Vice President of Operations by Eagle Systems Incorporated (ESI), two premier defense contractors. While with CRC and ESI, he managed Engineering and Technical Support Services Contracts with the U.S. Navy for development, acquisition, test and evaluation, and fleet support of aircraft systems and equipment. Mr. Cheesebrew was a member of the Military Officers Association of America, the Fleet Reserve Association, the Veterans of Foreign Wars, and the American Legion. Mr. Cheesebrew always demonstrated enormous kindness to everyone he came in contact with and he was loved and respected by family, friends and professional associates alike. A Memorial Service will be held on Friday, February 22, 2019 at 12:00PM (Noon) at Page-Theus Funeral Home, Leesburg Chapel with Inurnment to follow at Florida National Cemetery, Bushnell, Florida with full Military Honors by the U.S. Navy. In lieu of flowers the family has requested donations be made to The American Heart Association at www.heart.org. Online condolences may be shared by visiting www.pagetheus.com.  Arrangements are entrusted to Page-Theus Funeral Home and Cremation Services, Leesburg.

The family of Tony Martin Cheesebrew created this Life Tributes page to make it easy to share your memories.

Send flowers to the Cheesebrew family.