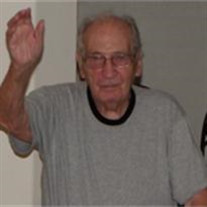 Grandpa Tom says Goodbye to all his friends and relatives as he goes to reunite with his family and friends in the Glory of the Kingdom of Heaven.He struggled this past year with his illnesses. Although he could not do the tasks he used to do, he always asked what he could do to help. He passed away with his son by his side on November 3, 2012.  He was born and educated in Troy NY. March 3, 1922. Tom was the son of the late Louis J. and Margaret Harkin Prefore. His wife of 64 years, Myrtle, whom he married in England during WW II, predeceased him. Tom moved to Leesburg, Fl in 2009. He was a big western movie fan especially a John Wayne enthusiast, and he followed his beloved Tigers, Yankees, and NY Giants. He enjoyed playing pinochle and playing poker which is a Prefore tradition.  Tom’s career spanned many decades and ranged from furrier to crane operator to tile mechanic to cake bakery cleaner where he retired from Freighofer’s in Albany NY. In between those jobs, he served in the US Army during WW II in the 861st Aviation Engineers Battalion in the European Theater.  Tom is survived by his son Paul R (Sharon) Prefore Sr. of Leesburg, Fl and daughter Dawn Germano of East Greenbush, NY. His three grandsons are Anthony J (Deanna) Germano Jr. of Averill Park, NY, P Rodney Prefore of Green Island, NY, and Marc A Prefore of Troy NY.Great-Grandchildren are Samantha (Little One) Germano and Alex Ryan.  He is also survived by many nieces, nephews, sister-in-law, special cousins and extended family, Caroline and Becky Grasso.Tom was predeceased by his brothers and sisters, Charles Todd Prefore, Margaret (Sissy) Harris, Mary Bell, Ann (Nanny) Jones, Leo “Bucky” Prefore, Isabelle Bessmer, Ellen Lanzetta, Paul Prefore, and Joanie (Redhead) O’Brien Tom’s family appreciates the care given at Leesburg Regional Medical Center North Campus by the staff and medical personnel and Cornerstone Hospice nurses.Mass of Christian Burial will take place on 8:30 A. M. Thursday at St. Paul’s Catholic Church, Leesburg, Florida.   The family will receive friends at Page-Theus Funeral Home 194 West Main St., Leesburg, Florida from 3:00-5:00 P. M. Wednesday November 7, 2012. In lieu of flowers the family suggests that memorial contributions be made to the American Red Cross – Hurricane Sandy relief fund 33 Everett Road Albany, NY 12205 Page-Theus Funeral Home and Cremation Services has been entrusted with all arrangements.

Grandpa Tom says Goodbye to all his friends and relatives as he goes to reunite with his family and friends in the Glory of the Kingdom of Heaven.He struggled this past year with his illnesses. Although he could not do the tasks he used to do,... View Obituary & Service Information

The family of Thomas Henry Prefore created this Life Tributes page to make it easy to share your memories.

Grandpa Tom says Goodbye to all his friends and relatives as...

Send flowers to the Prefore family.