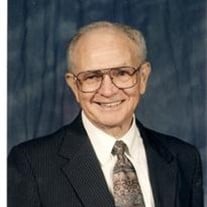 Theodore W 'Mr. Ted' Betz of Leesburg, FL. passed unto glory on July 25, 2009, and is now in the presence of his Lord and Savior, Jesus Christ. Ted is survived by his sweetheart and dear wife of 65 years Dolores M. 'Dee' Betz (nee; Rossi) of Leesburg, daughter Valerie L. Betz of Yalaha, FL., son Jay A. (Maya) Betz and three grand-children Aaron, Adam, and Kaelyn all of Tulsa, OK. Ted is also survived by a brother Robert J. Betz and family, two sisters Peggy A. Frank and her family, and Nancy L. Brillant and family, all in the greater Baltimore, MD. area. He was preceded in death by his father, Julius A. Betz, his mother Alice M. Betz Roday and his step-father Howard Roday. Ted was born in Dundalk, MD. and attended Sparrows Point High School where he was active in soccer, baseball and track, probably more than academics. He also played football in the city recreation league. As a teenager he also enjoyed semi-pro boxing and soccer. At the age of seventeen he received a post graduate scholarship to play football at the Fork Union Military Academy in VA., and subsequently a four year football scholarship to the University of Maryland. Throughout their married life, Ted and Dee moved to various states as a result of his occupation in the defense industry. They eventually settled in Orlando, FL. and retired to Leesburg in 1992. Ted has always loved the Lord and served Him in the ways the Lord would open to him. Ted and Dee were partners in their living faith and enjoyed their journey together. A memorial service for Ted will be held on Saturday, August 1st. at 2:30 p.m. in the First Baptist Church in Okahumpka, FL. with Pastor Clyde Billingsley officiating. Friends and family may call at the church on Saturday from 1:30 p.m. until the time of services. A private interment will take place in Hillcrest Memorial Gardens in Leesburg.Page-Theus Funeral HomeLeesburg, FLwww.pagetheusfuneralhome.com

Theodore W 'Mr. Ted' Betz of Leesburg, FL. passed unto glory on July 25, 2009, and is now in the presence of his Lord and Savior, Jesus Christ. Ted is survived by his sweetheart and dear wife of 65 years Dolores M. 'Dee' Betz (nee; Rossi) of... View Obituary & Service Information

The family of Theodore William Betz created this Life Tributes page to make it easy to share your memories.

Send flowers to the Betz family.