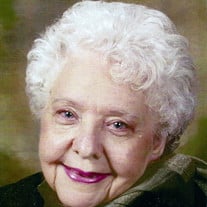 Thelma Ward Parker passed away Thursday, May 21, 2015, at the age of 93. She was in the 4th generation of an 8 generation family of Floridians who were born and raised in Florida. Thelma was born April 26, 1922 to Lonnie Franklin Ward and Rebecca Nix Ward, and was their last living child. She lived in Leesburg (Hawthorne At Leesburg) for more than 9 years before moving to Enterprise, Florida after the death of her husband Ralph N. Parker. She and Ralph were married for nearly 60 years and were members of First Baptist Church of Leesburg, where she also attended the Bykota Sunday School Class. Thelma was a devoted homemaker to her husband and a wonderful Mother to her three daughters. She was a very happy lady and was known to always wear a smile on her beautiful face, and her Christian spirit was obvious to all she encountered. She often told her children and grandchildren that if they had love in their lives, but only a dime in their pocket, they were richer than anyone else. Thelma was an accomplished painter, sculptor, Jewelry maker, violinist, pianist and organist. But, some of her best talent came when she was in the kitchen cooking. Her personal recipes were so special that she eventually wrote her own cook books, which have been for years treasured by her family and friends. After her children were grown, she and her husband moved to the Panama Canal Zone, where Ralph was the Lock Master at the Miraflores Locks in Panama. They lived in Panama for 18 years before his retirement. They eventually moved back to Florida and lived in Leesburg. After Ralph's death in 2000 she remained in her Leesburg home until 4 years ago, when she moved to Stone Island in Enterprise, Florida to live with one of her daughters. Survivors include her 3 daughters - Sharon A. Parker of Tavares; Karen J. Smith of Astatula and Norma J. McCraw of Enterprise, Florida. She is also survived by 8 grandchildren, 14 great-grandchildren and 5 great-great-grandchildren. A memorial service will be held at Florida National Cemetery, Bushnell, Florida at 11:00 A. M., Friday, June 5, 2015.

Thelma Ward Parker passed away Thursday, May 21, 2015, at the age of 93. She was in the 4th generation of an 8 generation family of Floridians who were born and raised in Florida. Thelma was born April 26, 1922 to Lonnie Franklin Ward and... View Obituary & Service Information

The family of Thelma Ward Parker created this Life Tributes page to make it easy to share your memories.

Send flowers to the Parker family.