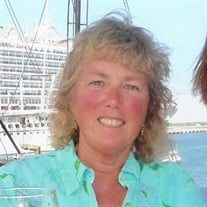 Suzanne Coffin Carpenter, 63, of Leesburg, Florida, passed away on May 31, 2017, with her devoted husband of 33 years, Ken Carpenter, by her side. Suzy and Ken lived in Merritt Island FL for many years before moving to Leesburg in December of 2015. Suzy was born February 18, 1954 in Hartford, Connecticut, the daughter of the late Richard Slater Coffin and Jean Anne Hart. She graduated from Minnechaug Regional High School in Wilbraham, Massachusetts in 1972 and from St. Lawrence University in Canton, New York in 1976. Suzy was employed most recently as a medical transcriptionist, and prior to that she was a Radio Operations Officer in the Merchant Marine. Ken also served in the Merchant Marine as First Mate, and they were able to sail together for many years. The ships they served on took them all over the world. After retiring, they continued traveling, but in RVs instead of ships. They and their two beloved dogs, Bosun and Dory, visited almost all of the 50 states. Suzy touched so many lives throughout her 63 years by her gentle soul and kind spirit. She loved her family, friends, and living life to the fullest. She found the perfect balance of work, play, love and laughter. She will be dearly missed. Besides her husband, Suzy is survived by her mother, Jean Savage, of Cromwell CT; her sister, Nancy McClurkin (Jim) of Carlsbad CA; her brother, Jeffrey Coffin (Wendy) of Gresham OR; step-sisters Rebecca Bodycoat (George) of Colebrook CT; Deborah Savage (Jeff Lauersdorf) of Escalante UT; Penelope Ziarnik (Mark) of Riverton CT; and a step-brother, Stuart Russo-Savage (Donna) of Montpelier VT, as well as many beloved nieces and nephews. There will be a family celebration of Suzy's life in the spring of 2018, on Cape Cod. Memorial donations may be made to Best Friends Animal Society, 5001 Angel Canyon Road, Kanab, UT 84741, or through their web site: bestfriends.org

Suzanne Coffin Carpenter, 63, of Leesburg, Florida, passed away on May 31, 2017, with her devoted husband of 33 years, Ken Carpenter, by her side. Suzy and Ken lived in Merritt Island FL for many years before moving to Leesburg in December of... View Obituary & Service Information

The family of Suzanne C. Carpenter created this Life Tributes page to make it easy to share your memories.

Send flowers to the Carpenter family.