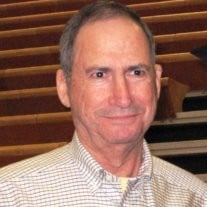 Stephen P. Kupferberg, 69, Leesburg, FL went to be with the Lord on October 29, 2013 at Leesburg Regional Medical Center, Leesburg, FL. Mr. Kupferberg was born on October 4, 1944 in Brooklyn, New York to his parents Lazarus Lee Kupferberg and Beatrice (Silverman) Kupferberg. He graduated from Northern Illinois University with his Bachelor’s Degree in 1966 and received his Masters Degree from the Naval War College in Newport, Rhode Island in 1997. Mr. Kupferberg was a former Systems Engineer in the Defense Industry and had worked for the National Imagery Mapping Agency and as a Contractor for S.A.I.C. in Washington, D.C. He was a longtime volunteer with the Boy Scouts of America. He and his wife moved to Leesburg, FL 3 years ago from Middletown, Maryland and were members of The Church of the Transfiguration in Braddock Heights, MD and St. James Episcopal Church of Leesburg. Mr. Kupferberg was the Commander of the Harris Chain Sail and Power Squadron, Vice Commander of the Legacy Neighborhood Watch and was a volunteer for the American Red Cross where he was an instructor in both Maryland and Florida. He is survived by his loving wife of 43 years: Ann D. Kupferberg of Leesburg, FL; a son: Andrew Stephen Kupferberg of Tampa, FL; two sisters: Jill Kupferberg Cappadoro and Jody Lee Kupferberg both of Tampa, FL; a brother: Robert “Bob” Kehne of Maryland; many loving nieces and nephews. Mr. Kupferberg was preceded in death by his parents, a stepmother Dorothea Staley Kehne Kupferberg, a daughter Melissa Ann Kupferberg and a brother Jeffrey Kehne. A Funeral Mass will be held on Saturday, November 9, 2013 at 2:00PM at St. James Episcopal Church in Leesburg, FL. In Lieu of flowers the family requests donations be made to Houndhaven a safe haven for dogs at P.O. Box 185 Minneola, FL 34755 or The American Red Cross in his loving memory. Online condolences may be left by visiting www.pagetheusfuneral.com. Services entrusted to Page-Theus Funeral Home Chapel, Leesburg, FL.

The family of Stephen P. Kupferberg created this Life Tributes page to make it easy to share your memories.

Stephen P. Kupferberg, 69, Leesburg, FL went to be with the Lord...

Send flowers to the Kupferberg family.