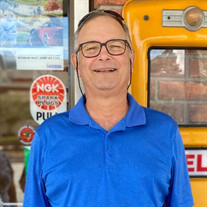 Stephen “Steve” Wallace Grover, 65, of Fruitland Park, Florida, went to be with the Lord on February 27, 2022. Steve is survived by his loving wife of 45 years, Mary, his children, Christopher (Amanda) Grover and Amy (Paul) Horton, his grandchildren, Benjamin and Holden Horton, his father, Wallace Grover, his brothers, Jeff Grover and Ed (Nan) Grover, his mother-in-law, Shirley Walters, his father-in-law, Charles Canell, sister-in-law, Debbie Hood and several nieces and nephews. He was predeceased by his mother, Mabert Grover and his sisters-in-law, Tracy Grover and Rebecca Harris. Steve was born in Tampa, Florida on March 21, 1956 to Wally and Mabert Grover. His early years were spent on Amelia Island, where he acquired his lifelong love of the beach. For a short time, he lived in Hendersonville, NC and Columbia, SC, places he remembered fondly and where he developed lasting friendships. He moved back to Florida in 1975 and the Grover family opened Tire Round-Up in Leesburg, a business that he grew over the next 45 years. In 1976, he married the love of his life Mary and together they created a beautiful life for their family. To know Steve was to love him. He was a charismatic storyteller who thrived on spreading joy and laughter. His favorite pastime was golf and he cherished all of the friendships he formed on the green. He lived life with his whole heart and gave so much to those around him. He adored his family and never failed to show how much he loved them. While he was an amazing husband and father, his favorite role was “Papa.” He loved his grandkids more than anything in this world and made sure that every moment they spent together was special. Our hearts are broken with his passing but as he always told us, “I love you more today than I did yesterday and I will love you more tomorrow than I did today.” Memorial services will be held on March 12, 2022 at 11:00 am at Good New Church, 400 Executive Blvd., Leesburg, FL, 34748.

The family of Stephen Wallace Grover created this Life Tributes page to make it easy to share your memories.

Send flowers to the Grover family.