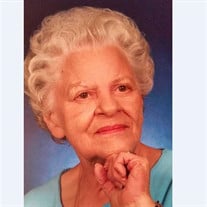 Shirley Elizabeth Howard of Leesburg, Florida passed away on Wednesday, June 20, 2018, at the age of 88, while under the care of hospice at the home of her son & daughter-in-love, Alfred & JoAnn, in Yalaha. She was born in Saskatoon, Saskatchewan, Canada on April 5, 1930, to the late Alfred and Dorothy (Walkemeyer) Christensen. She had a Master’s Degree in Gifted Education and was the first recipient of the Fulbright Scholarship from Rollins College in Orlando, from where she earned her BA in Music. While attending Rollins, Shirley made a lasting friendship with Fred Rogers who was also a student there, although a year ahead of her. A resident of Leesburg for over 60 years, she taught music at several area schools, sharing her passion and love of the arts with children of all ages. In addition to her years teaching, she was active in helping those with terminal illnesses through participation with Women for Hospice, and in support of our veterans through volunteer service at the Amvets Auxiliary of Mt. Dora. In 2014, after countless years of involvement as musical director, board member, and actress, Shirley was awarded Lifetime Membership at the Melon Patch Theater in Leesburg. She was also an active member of the choir, the Episcopal Church Women (St. Mary’s chapter), and the congregation of St. James Episcopal Church in Leesburg. She is survived and lovingly remembered by her sons David Lee (Martee) Howard, Jr. of Cocoa Beach, and Alfred (JoAnn) Howard, of Yalaha, and grandchildren Alexander Howard, Hunter (Linsey Hunlock, fiancé) Howard, Christian Howard, Casey (Jentzen) Judice, Gage Marchand, and Reagan Marchand, and nieces and nephews. In addition to her parents, she is predeceased by her sister and brother-in-law, Bernis & Malcolm Howell. A memorial and interment service will be held at St. James Episcopal Church, 204 Lee Street, Leesburg, FL 34748, with Father Thomas Trees presiding on Monday, July 2, 2018 at 11 a.m. In lieu of flowers, the family would request that you honor Shirley’s memory with donations made to St. James Episcopal Church of Leesburg or Cornerstone Hospice in Tavares. Online condolences may be sent at pagetheusfuneralhome.com. Arrangements under the care of Page-Theus Funeral Home and Cremation Services.

Shirley Elizabeth Howard of Leesburg, Florida passed away on Wednesday, June 20, 2018, at the age of 88, while under the care of hospice at the home of her son & daughter-in-love, Alfred & JoAnn, in Yalaha. She was born in Saskatoon, Saskatchewan,... View Obituary & Service Information

The family of Shirley Elizabeth Howard created this Life Tributes page to make it easy to share your memories.

Shirley Elizabeth Howard of Leesburg, Florida passed away on...

Send flowers to the Howard family.