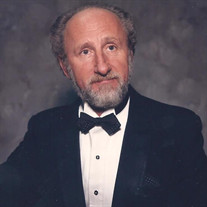 Roger N. Bergeron, 82, Leesburg, Florida passed away on September 14, 2016 at Tavares Hospice House surrounded by his loving family and staff of Cornerstone Hospice. Mr. Bergeron was born on December 24, 1933 in Pawtucket, Rhode Island to his parents Wilfred and Anita Bergeron. Mr. Bergeron retired from the United States Air Force as a Senior Master Sergeant serving multiple roles of leadership throughout his career. After retiring from the military he became a Real Estate Agent for Goodside Homes in Colorado and after that became the owner of Cimarron Liquors Aurora, Colorado. He and his loving wife Margaret moved to Leesburg 25 years ago from Denver, Colorado and were members of St. Pauls Catholic Church of Leesburg, Florida. He was a former member of the Elks Club and enjoyed golfing, bowling, playing piano and painting. He is survived by his loving wife of 60 years: Margaret Bergeron of Leesburg, FL; three sons: Roger (Sheri) Bergeron, Jr. of Orlando, FL, Michael (Cheryl) Bergeron of Richmond, VA and Bryan (Shelly) Bergeron of Centennial, CO; a daughter: Michelle (Bill) Kramm of Centennial, CO; nine grandchildren; five great-grandchildren. A Mass of Resurrection will be held on Monday, September 19, 2016 at 8:30AM at St. Pauls Catholic Church, Leesburg, Florida. A Visitation will be held on Sunday, September 18, 2016 from 2:00PM to 4:00PM at Page-Theus Funeral Home, Leesburg, Florida. In lieu of flowers the family has requested donations be made to Cornerstone Hospice in Roger’s loving memory. On-line condolences may be shared by visiting www.pagetheus.com. Arrangements are entrusted to Page-Theus Funeral Home and Cremation Services, Leesburg.

Roger N. Bergeron, 82, Leesburg, Florida passed away on September 14, 2016 at Tavares Hospice House surrounded by his loving family and staff of Cornerstone Hospice. Mr. Bergeron was born on December 24, 1933 in Pawtucket, Rhode Island to his... View Obituary & Service Information

The family of Roger N. Bergeron created this Life Tributes page to make it easy to share your memories.

Send flowers to the Bergeron family.